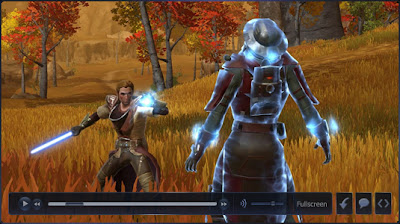 It’s another double header Friday update as we get to see BioWares first episode of the new four-part “Choose Your Side” video series, in which two classes are pitted against each other one on one.

During the video members of the Star Wars: The Old Republic team choosing their favorite class in a one-on-one fight. The first episode pits the Jedi Knight against the Bounty Hunter.

In “Choose Your Side,” members of the Star Wars™: The Old Republic™ development team debate the merits of the various in-game classes to see who will truly reign supreme. In the first installment in this four-part series, the noble Jedi Knight squares off against the nefarious Bounty Hunter. In support of the Jedi Knight is Senior Writer Hall Hood and Designer Austin Peckenpaugh, while Senior System Designer Pete Warner and Writer Randy Begel defend the Bounty Hunter.

Take a look at the Jedi Knight V. Bounty Hunter below: