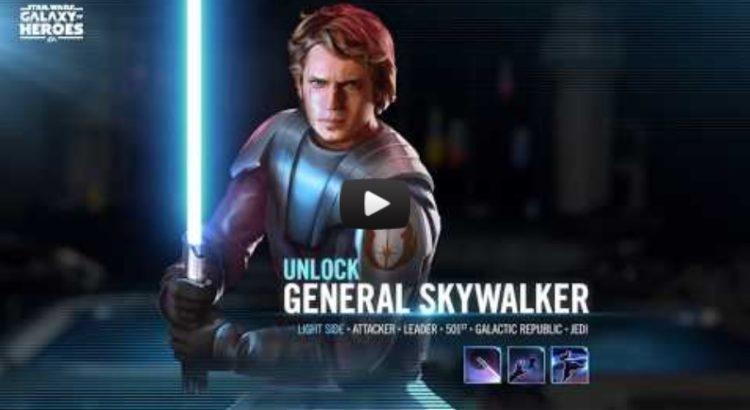 The guys over at Capital Games has posted a new developer insight. This time they are talking with the designers of General Skywalker and how they went about creating this iconic character from the Star Wars universe.  Check i out

Q: What makes General Skywalker special? Does he have any unique mechanics?
CG_Prophet: Absolutely, Anakin Skywalker has been many things over the years; pod racer, droid builder, Jedi Padawan and even a legendary pilot, and now he’s coming to Galaxy of Heroes this week as General of the 501st! I’m super excited for him to finally come to the game.

CG_ParkingInstructor: General Skywalker is unlike any other character players can get their hands in the game right now. He is an absolute boss, as he should be, and by that I mean he actually feels like playing a raid boss character in Galaxy of Heroes. He takes 2 actions per turn (like a raid boss) with his linked abilities (more on that later) and depending on which Special you use first, Skywalker will apply a different effect on his second attack.

CG_Prototype: He has quite the arsenal of attacks but it really depends on which ability you use first. For example, if you use his Basic attack, it will trigger a Special ability (Telekinesis) for his second attack and that’s a completely different attack than either Special 1 or 2.

CG_ParkingInstructor: But even besides the 2 actions per turn, his Leader ability has a very unique mechanic with Advance and Cover. General Skywalker reactively changes his state in battle, and you will see him change stances to clearly show what he is doing. We wanted Advance and Cover to feel like a transition between phases of a Raid Battle where you had to adjust your tactics significantly. This is a big first for the game and really sets him apart from the other characters we have created.

Q: How does “use 2 abilities per turn” mechanic work in the game? Do you select abilities twice?
CG_Prophet: No, the player will choose the first ability General Skywalker uses, then trigger a 2nd ability that is linked to the first if able. There are some circumstances where Skywalker is Ability Blocked and will use his Basic attack instead. For example, Special 1 can deal double damage if used first as opposed to Special 2 being used first, which will result in a critical hit if possible.

Q: Can you explain how Advance and Cover works?
CG_ParkingInstructor: General Skywalker really comes alive when you put him in the leader slot, which enables his “General of the 501st” Leader ability. Skywalker will Advance while he has Protection. While Advancing, General Skywalker’s 501st allies cannot lose health, but once his Protection is depleted, he goes into Cover. While in Cover, his allies can lose Health and you can try to defeat them before he goes on the offensive again.

CG_Prototype: Skywalker recovers 10% Protection per turn (on anyone’s turn, not just his own) and once at full Protection, he will switch back to Advance and start the cycle again.

Q: So wait, how do you defeat him?!?!?
CG_ParkingInstructor: After you defeat all of General Skywalker’s allies, the fight moves into the final phase where he gains a ton of turn meter at the end of every enemy’s turn. This is the time he’s vulnerable to being defeated, but you’ll have to race to take him out before he takes a bunch more turns. I hope you saved some of your strongest abilities for the end of the fight!

Q: How does the new keyword “Remove” come into play with the Advance and Cover mechanics?
CG_ParkingInstructor: We’ve used dispel in the past for characters that need to remove debuffs but General Skywalker has the special keyword, Remove. This will remove all status effects, including un-dispellable effects. This was necessary for the mechanics of General Skywalker’s kit and given the legendary nature of General Skywalker’s abilities, we felt it made sense in this rare case but this is not something we plan to use in future character kits.

Q: What’s his role in battle?
CG_ParkingInstructor: Besides being a Leader, he serves as a tank and attacker for the Clones. This really pulls the 501st squad together and allows them the time to dish out a ton of damage while being protected by General Skywalker. He also hits hard himself and disrupts the enemy with a host of negative effects that his allies can take advantage of. If you’ve seen the show, it made complete sense for General Skywalker to always be on the front line and fighting side by side with his squad.

Q: Which modes do we expect General Skywalker to be the most effective in?
CG_Prototype: Skywalker is an incredibly talented Jedi and excels at pretty much everything he puts his energy towards, so it makes thematic sense that he can do well in just about any mode. He can lead a very good arena team, he can deal solid damage in a raid, or fill in as a top squad in Grand Arena and Territory Wars.

Q: What squad do you recommend to support General Skywalker?
CG_Prophet: The ideal team is entirely 501st as he gets a big bonus to his kit if all allies are 501st. If you don’t have all of them ready to go, you can add another Jedi that works particularly well with Clone Troopers: Shaak Ti. You’re going to need Ahsoka Tano since she has the 501st tag and is needed for a full 501st squad at this time.

CG_Prototype: We are also releasing the 501st ARC Trooper in the future to help fill out this squad. Once you have unlocked him, your Padme’ team can have Ahsoka back.

Q: Why did we make another Anakin instead of reworking the one already in the game?
CG_Prophet: The current Jedi Knight Anakin is from Episode III: Revenge of the Sith and is more representative of Anakin from the prequel movies. We wanted to dive into the 501st storyline from the Clone Wars TV show and show Anakin as a masterful general of the Galactic Republic army.

CG_ParkingInstructor: We also wanted to explore new mechanics with such an iconic character and Jedi Knight Anakin already has a solid identity in the game. It didn’t make sense to mess with the Anakin that is working well and leave an empty space in the Padme squad

CG_Prototype: This Anakin would have been worthy of the rank of master…

Q: Were there specific scenes or moments were you trying to capture with his kit?
CG_ParkingInstructor: For the theme of the kit, we relied heavily on the Battle for Umbara arc. There’s a really good early scene where he’s leading his men and you get to see him fight alongside the 501st. This happens throughout the series, but “Darkness on Umbara” is the episode I went to for establishing his character. For his ability animations, we pulled Lightsaber and Force techniques from a variety of battle scenes throughout the series.

Q: Where does the story in the event come from?
CG_Prophet: The event itself comes from the Clone Wars episode, “ARC Troopers”. We wanted to capture General Skywalker leading the 501st into battle and dueling with Asajj. We had to take some artistic liberties and added in a few more characters who weren’t there in the show but it makes for a more compelling event. In general, the whole event is loosely based on that episode and lets you play through the events of the show. This is alluded to by Shar when he introduces the event for the first time.

CG_Prototype: The event panel art has Anakin dueling Asajj Ventress, which is pulled from this episode.

CG_Prophet: I wanted to showcase Anakin’s skills as a pilot and duelist, but this is also the episode where Echo and Fives become ARC troopers. This is a big moment for them in the show and also when they receive the Phase II armor that our in-game models have.