At Guild Stummit earlier this month, the dev team revealed to us there would be special events coming to SWTOR. However, they were very tight-lipped about the whole thing. We wanted to know what type of events, when they would be coming and of course, anything else they could tell us. All they could tell us was “we can’t say anything else about special events at this time.”

Well, now Stephen Reid has decided to reveal just a little bit more to us. This post in the official forums reveals slightly more details than we were previously told about these special world events coming soon to the game. 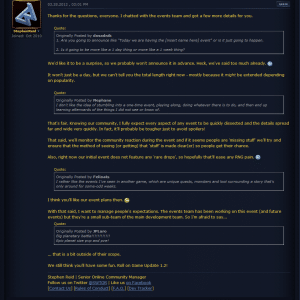 Thanks for the questions, everyone. I chatted with the events team and got a few more details for you.

We’d like it to be a surprise, so we probably won’t announce it in advance. Heck, we’ve said too much already.

It won’t just be a day, but we can’t tell you the total length right now – mostly because it might be extended depending on popularity.

That’s fair. Knowing our community, I fully expect every aspect of any event to be quickly dissected and the details spread far and wide very quickly. In fact, it’ll probably be tougher just to avoid spoilers!

That said, we’ll monitor the community reaction during the event and if it seems people are ‘missing stuff’ we’ll try and ensure that the method of seeing (or getting) that ‘stuff’ is made clear(er) so people get their chance.

Also, right now our initial event does not feature any ‘rare drops’, so hopefully that’ll ease any RNG pain.

So what do you want to see in these special events? The dev team seems really excited about what they have planned for us and I can’t wait to see what kind of events they roll out first.