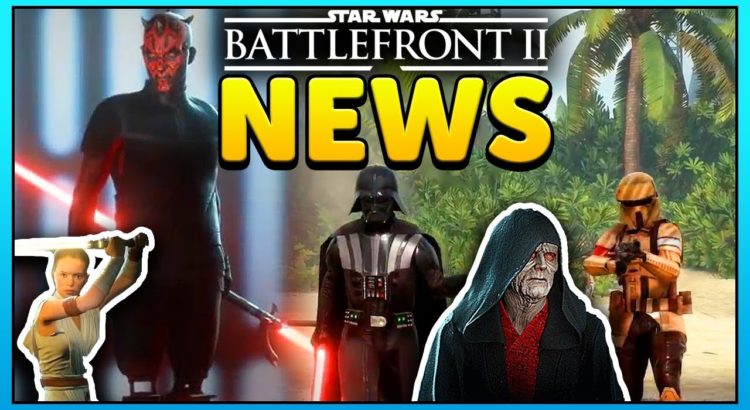 After more than two years of free content, the vision for Star Wars Battlefront II is now complete, according to the Creative Director Dennis Brännvall. Also: The Battle on Scarif is coming!

The game had a rocky start but has since deployed 25 free content updates that have shaped and expanded Star Wars Battlefront II into almost a completely new game.

Most fans will say they redeemed themselves from those early launch days with great content updates, immersive content, battles you can play solo or with friends, and so much more. They are now completing their vision as they return to the Age of Rebellion, which was started in February. See what Brännvall and the team have to say about this.

Here’s what the official update says:

Looking beyond April, we’re transitioning to a phase where the servers, in-game challenges, recurring events such as Double XP and more, and game support will carry this broad and rich Star Wars gaming experience into the future. This means that we’re moving away from delivering regular content updates. As the game lives on with the players and our community, we’re looking forward to hearing your stories for years to come.

April 29 – The Battle on Scarif Update

Until then, there’s some great content to look forward to.

On April 29, we’re bringing the Age of Rebellion to Supremacy and Instant Action, introducing the high-agency battles on Hoth, Tatooine, Yavin 4, Death Star II, and – the highly requested location from Star Wars Battlefront (2015) inspired by Rogue One: A Star Wars Story – the tropical world of Scarif.

Given the massive difference in military might between the Rebels and the Empire – and Death Star IIand Scarif not lending themselves to capital ships narratively – the battles in Age of Rebellion Supremacy will be fought throughout the ground phase exclusively. In return, we’re enabling the ability to pilot starfighters on a selection of the Age of Rebellion Supremacy locations.

Scarif and Crait are both joining the Heroes and Villains game modes and Co-Op will see the addition of the MC85 Star Cruiser, First Order Star Destroyer, and Scarif.

We’re bringing the experience you get in Co-Op to offline solo play, too! Instead of teaming up with other players online, this version will let you play exclusively with and against AI on all Co-Op enabled locations. This new way to play will be included as an option in Instant Action.

Furthermore, we’ve heard you ask for more appearances. As our way of saying thank you, we’re giving all players three new ones inspired by the concluding chapter of the Skywalker saga: Rey wielding her yellow lightsaber, Kylo Ren wearing his reforged mask with the hood up, and Emperor Palpatine binding it all together with his latest, menacing set of robes. This will also be Palpatine’s default appearance in sequel era Supremacy, Co-Op, and Instant Action, as we enable him for those along with Chewbacca on the light side.

If you go and read the full update, you’ll see there’s even more from Dennis Brännvall and the Star Wars Battlefront II team, but these are the highlights and most important parts. I’m excited to see this new Scarif update and what they have planned for the future beyond that.

**If you’re still not playing Star Wars Battelfront II yet, there’s time to hop into the action. You can find it on PC and all console platforms.