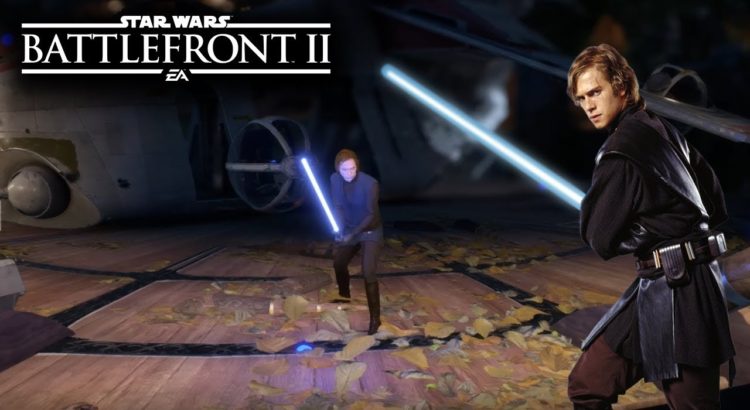 Anakin Skywalker is coming to the next big update for Star Wars: Battlefront 2, which is scheduled for tomorrow.

He will be joining the rebel/ non imperial side, and the devs have promised that he’s going to be “one of the strongest light side heroes in Battlefront II.” He should be strong lore-wise, of course, but it sounds like he could be a great big problem in terms of gameplay.

Star Wars™Battlefront™ II’s The Chosen One Update* is slated to go live February 27, and as the name suggests, it’s time for one of the renowned heroes from the Clone Wars, Anakin Skywalker**, to lead the way on the battlefront.

You’ll find the specifics about our latest addition to the hero roster below. Plus, learn about the 501stLegion***, the Coruscant Guard, and other additions and changes to clone trooper Appearances – including the opportunity to play as armored officers – all coming with this update!

Also, don’t miss out on a behind-the-scenes look at how we brought Anakin to the game by reading our article on animating Anakin, our interview with voice actor Matt Lanter, and our rundown on how a hero is made.

When young Anakin Skywalker – a slave owned by a junk dealer on Tatooine – first met a Jedi-led entourage in need of spare parts for their broken starship, they couldn’t imagine the ensuing impact.

Facing some initial resistance from the Jedi Order, Anakin was finally taken under Obi-Wan Kenobi’s wings as a Padawan to learn the Jedi way. He was believed to be The Chosen One, who would bring balance to the Force by ending the Sith.

Filled with compassion and raw power, Anakin’s responsibilities grew with his strength, taking on the role as a General for the Galactic Republic where he commanded the 501st Legion in skirmishes against the Separatists.

While his emotions would ultimately steer him off the path of the Jedi, he’s still on the light side in Star Wars Battlefront II.

How to Play as Anakin Skywalker in Star Wars Battlefront IIAnakin is an extremely powerful lightsaber wielder. While his master Obi-Wan Kenobi is an expert of defensive combat, Anakin is on the other side of the spectrum, with melee attacks second to none in Star Wars Battlefront II. His offensive power with a lightsaber is demonstrated even more when using his guard-breaking and high-damage Passionate Strike.

You’ll also experience The Chosen One’s might with the Force. While focusing to deliver his Heroic Impact, Anakin absorbs a lot more damage. As a matter of fact, any incoming attacks against Anakin will make this Ability even stronger. When released, he sends all surrounding opponents flying with a 360-degree Force push.

Furthermore, using the Pull Dominance Ability, Anakin pulls his enemies in front of him, leaving the targets vulnerable to follow-up attacks. This Ability is especially effective combined with an ally’s area of effect attack.

And to capture Anakin’s care and passion for others, he’s been given a fourth and unique ultimate Ability: Retribution. As Anakin and his nearby allies take damage, his anger builds up, ultimately unleashing a Force choke on all enemies in the area.

Anakin Skywalker’s Appearances, Additional Clone Trooper Legions, and More Anakin Skywalker is wearing his Jedi Knight outfit by default, with the Jedi Robes as an unlockable alternative. Led by him during the Clone Wars, the 501st Legion is joining the ranks of the Galactic Republic as new clone trooper appearances, too. The Coruscant Guard, missioned with peace keeping on the capital planet with the same name, arrives with this update as well.

Some other updates to the clone army are heading your way, including fixes to current legion appearances, and the opportunity to play as armored officers.

We hope that you’ll enjoy The Chosen One Update when it drops on February 27. Remember to keep an eye on this space, and our roadmap, to learn more about upcoming content.