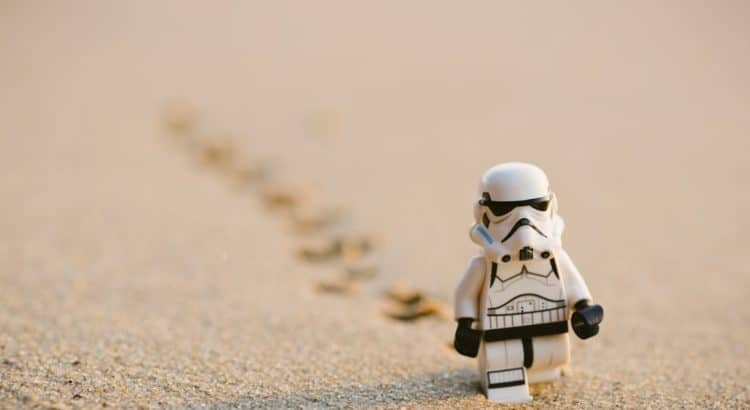 It has been written countless times over the years that George Lucas cut a deal with 20th Century Fox, ahead of the release of the first Star Wars movie, that saw him forego a $500,000 fee in exchange for receiving all of the merchandise rights for the film.

The movie studio couldn’t see the potential of Star Wars and felt that the film was likely going to be a massive flop. So to them, they were giving up practically nothing and keeping half a million dollars in cash.

Lucas saw things differently; he believed that Star Wars was going to be a massive hit and that fans would love it so much they would be interested in buying figurines, mugs, T-shirts, and much more. So he was happy to give up his $500,000 upfront in exchange for exclusive rights to millions of dollars in merchandise sales.

This led to the Star Wars logo being featured on just about everything you could possibly imagine over the last four decades, making George Lucas a billionaire. Some products have been better than others though, with several becoming valuable collectors’ items. Here is some of the best Star Wars merchandise ever made.

The great thing about playing cards is that they aren’t bulky and can be used for a plethora of fun games, from Go Fish to Texas Hold’em.

Of course, the Star Wars universe has its own unique card games like Sabacc, which uses special cards with “positive” and “negative” values. But owning a Sabacc deck limits you to playing the games from a galaxy far far away. On the other hand, a standard deck that has a Star Wars theme will give you the freedom to play Earth games like poker, so you can explore the wide range of different variations that would not be possible with Sabacc. Thankfully, they all share most of the same basic rules, so it won’t be difficult to pick up two or three different games.

While any old deck of cards will suffice, Star Wars playing cards are a great conversation starter while playing with friends and allow you to show off your love of the franchise. They’re also much more accessible than other merchandise since you can pick up a deck for around $15.

Counting this as one of the “best” pieces of merchandise may be playing fast and loose with the word “best”, but it’s one of the most crucial pieces of memorabilia in the franchise’s history so it deserves a place.

In 1977, shortly after the release of the film, Kenner had begun to manufacture Star Wars figurines but it wouldn’t have them ready in time for Christmas. To avoid missing out on this lucrative retail period, the company produced the “Early Bird Certificate”, a cardboard poster that featured images of the first 12 Star Wars figures they planned to manufacture and a certificate that could be mailed back to the company.

Posting this certificate would grant the owner the first four figures by February of the following year.

If you have a mint condition certificate today, it could be worth thousands.

We’ve all seen the video of the American woman in one of Hasbro’s Chewbacca Masks that she’d bought from Coles. When wearing the mask, it emitted roaring noises. The video went viral in 2016 after the woman demonstrated how it worked before falling into the most hysterical laughing fit you will ever see.

While it’s certainly a great piece of merchandise and perfect for anyone who loves to dress up as Star Wars characters, it wouldn’t have sold nearly as well or been nearly as funny if it wasn’t for this video.

Released by Hasbro in 2010, the Millennium Falcon is perhaps the best Star Wars vehicle toy ever manufactured. Unlike the versions of the toy that can be bought today, this 30-inch model ships with figurines of Han Solo and Chewbacca, has real working headlights, produces sound effects, and a mini-fighter vehicle.

Also in the box are seven projectiles that the Millennium Falcon will launch across the room, a feature that is fun for anyone playing with it but annoying for anybody nearby.

Widely regarded as the best Millenium Falcon ever made, the price has been pushed up by traders online. At the time of writing, only one is available on Amazon with the seller demanding £650.

This actually isn’t as high as has been seen in the past. Some sellers have attempted to sell it for as much as £999.99, though it has been possible to buy used ones for as little as £200 in recent years.