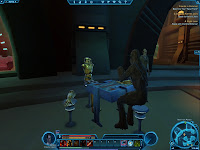 My pal, Jason, was in the beta program of SWTOR (same as myself) and shortly after launch, we brought you his review of the game so far. It was a great review but based mostly on early impressions and of course, on the beta. So he has now written a Part 2 Hands-On review to give us all more insight into the game and his opinions of it.

His part two covers things he missed or was unable to cover in the first review for a variety of reasons (didn’t exist in the game yet, didn’t have enough exposure to it pre-launch, etc.) In this part two, Jason covers:

So the new hands-on review goes into each of these points in more detail. On the topic of storyline he says:

Having a storyline in an MMO isn’t new (I know that some people have claimed SWTOR is the first). LOTRO actually did it as well over 2 years ago. Of course, they were following the Lord of the Rings storyline but, none-the-less, a storyline. The difference, as I’ve outlined above, is that in LOTRO, there were too many times where progressing the storyline required multiple players which can create problems for solo-player people like myself. The storyline in SWTOR is entirely unique. It’s not based on any of the movies. And, unlike LOTRO, is completely soloable. This adds an incredible dimension to the game. Rather than just mindless quests and instances, players move from place to place with a purpose.
Head on over and check out the rest of his follow up review and let us know what you think.
Read more:
Review: Hands-On With StarWars the Old Republic (SWTOR): Part 2