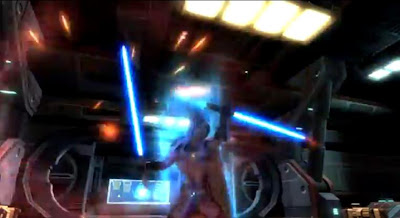 We know that Jedi can deflect blaster shots with their lightsabers, and have even seen Vader deflect Han’s shots with his hands. I think its obvious that using your hands would require greater command of the Force, but which method do you think is more effective?

Han only shot at Vader twice, and then Vader used the Force to grab the blaster. If someone shot at a Jedi many times, do you think it would be harder to accurately block the shots with your hands?

I was thinking that your hands don’t cover as much space as a lightsaber, so it may be harder to block many shots. Also, it could be more difficult to move your bare hands quickly enough to deflect shots than to simply move your lightsaber.

Below video make lightsaber deflection look easy at least. Check it out:

Interested in SWTOR Movies? We have new movies most weekdays here on swtorstrategies! Have suggestions for movie we ought to feature? Get in contact with us here