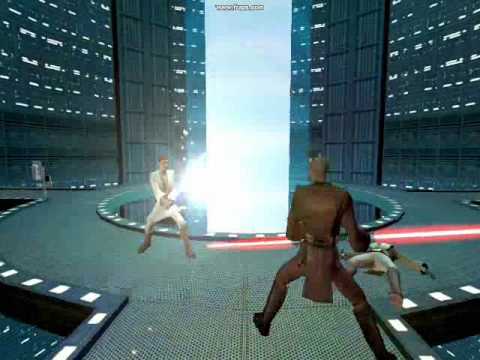 Fan projects are so much fun. That’s one reason I write so much about them here. We love being able to share with you the cool, fun, and sometimes funny stuff we find from other fans online and around the globe. Sometimes you send it to us via Facebook or email and we love that too. I think Star Wars fans are some of the most creative people around. Seriously, I write about a lot of fan stuff but it’s the Star Wars fans that really put their heart and souls into things and seem to come up with some of the best and most creative ideas. Here’s a little project we found that recreates the Duel of the Fates from The Phantom Menace using Star Wars Galaxies. It’s a fun little watch even if you never played the game but bonus enjoyment if you were a fan of SWG, too.

It’s actually pretty accurate and very well done. It’s impressive what some people can do with enough time on their hands and an open game like SWG. So go ahead and give it a watch and let us know what you think. It’s a fun little fan film done in a unique way. So I give it two thumbs up and would watch again.

It’s under 5 minutes long so it won’t take up your whole day. Give it a watch when you’re on break or supposed to be studying or something (we won’t tell).

“My recreation of Duel of the Fates from the Phantom Menace using Star Wars Galaxies.”

Star Wars Galaxies is still available on Amazon, if you want the disc for your collection, or you need it to play SWGEMU. Get SWG here.