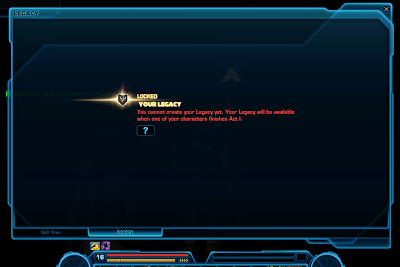 The legacy system is one based on the principal of family. Many of the characters in the movies were related in one way or the other so the guys that made SWTOR decided to make it where the characters you create in the game are related.

Some of the main relations are brothers, sisters, daughters, sons, wives and husbands but there are a few others. When you choose the relationship between your main character and a new one that you make, it has to be realistic. For example, your Twi’lek cannot be the mother or father to your human but they can be married to a human character.

Creating a Surname
Once you complete your class quest in act 1, you’ll get to choose your surname (last name). It’s an easy process. When you’re prompted to do so, enter the name you want to use. If you choose a name that is already in use on the server, you’ll have to choose again. When the name you choose is approved, you have begun your legacy.
Take time to think about the name that you want to use and choose wisely. This name will not only appear on the character you already have, but it will be attached to every character you create on that particular server in the future. This is the beginning of your family tree.
If you name one of your alts something that doesn’t go well with your surname you can hide it from view in the character menu screen just as you do with titles you receive. The surname of any alt will not appear until they have completed act 1, so keep that in mind.
Legacy Points
After you create your surname, a purple Legacy bar will appear under your green XP bar. As the bar fills up, you earn Legacy Levels. You can tell how many legacy points your alt has by monitoring the legacy bar. You gain these legacy points just like you would earn your XP points by participating and completing flashpoints, questing, battling and even pvp. You also get additional points when you create another alt.
Legacy levels will unlock items, perks and abilities. These can be used for your first character or on a new character that you create to help level it up faster. In some cases, you may even be able to change the way the new character earns XP, so it gives players more options.
Why Is the Legacy System Important?
The legacy system in SWTOR is very important for several reasons. The legacy system is designed to inspire and encourage players to play through different classes to experience every side of the game, instead of only playing through one story mode. It does this by offering special perks to the players that choose to create more than one character.
Since most MMO players end up making more than one character anyway, this is a nice feature that most gamers will enjoy. It adds extra levels of play and makes the game even more interesting.
Some of the perks offered by the Legacy system includes but is not limited to gear, leveling aids, skills and rights of passage (like mounts) early in the game. In a sense, you’re rewarded for creating more than one character.
As time passes and more updates are implemented, the legacy system will probably add more perks. This will give those who have already completed a couple toons something new to play with and the ones who have just started more to strive for. It may even be extended to characters you have on multiple accounts in the future but for now, it is limited to the ones on the same account.