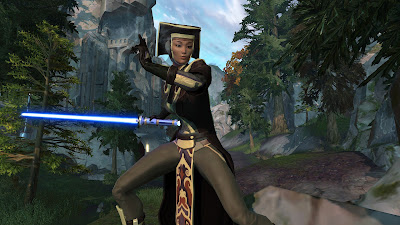 Another build coming at you courtesy of http://www.swtorsavior.com.
This one is for PVP and the class we are going to be running through is the Jedi Consular Shadow. Now for those of you that have played World of Warcraft you will find it easier if you think of the Shadow as a Rogue.
Your job is to get in and out without being seen and cause as much damage as you can!
Essentially you want to get to the back lines of the enemy and take down all the healers and squishy DPS players.
If you have just started PVP with a Jedi Shadow it can be tough though so here is a solid build to use:

The main skills that you will be using with this build in PVP are the Spinning Kick which although it requires stealth it will allow you to stun a target for 2 seconds so is a brilliant opener into combat.

Sneak up to the target and use Spinning Kick. Move behind them fast and use Shadow Strike and then Force Breach.
Then hit them with 2 clairvoyant Slashes and follow it up with Project!

You also get very good survivability options with this build.

If you want a complete set of builds for both leveling and PVP with complete guides on how to use them as well as a complete leveling guide head over to http://www.swtorsavior.com