Ralph McQuarrie, the artist who committed George Lucas’ ideas to canvas when he was trying to drum up interest in ‘Star Wars,’ has died at the ripe old age of 82. If there’s any justice in the world, he’ll turn into a blue-tinted ghost to hang out with Yoda and Alec Guiness.

McQuarrie’s role in getting ‘Star Wars’ onto the big screen can’t be overstated. Lucas was getting shot down left and right by studio heads when he went in to pitch ‘Star Wars,’ but after commissioning McQuarrie to generate some concept art, his next meeting — with 20th Century Fox — was a success. From that, we get John Williams’ classic score, ILM, Indiana Jones and Pixar, plus a countless number of future writers and directors inspired by ‘Star Wars.’

How cool would it be to put “Designed Darth Vader” on your tombstone? 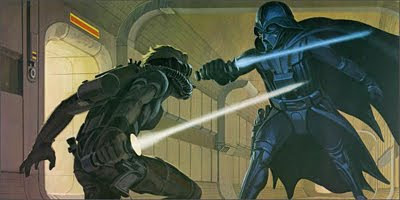 It should be said that these weren’t the final character designs, just the ones that got Lucas his greenlight from Fox. They changed quite a bit, either in small ways (e.g. Vader) or radically. As the photo gallery on StarWars.com shows, C-3PO originally looked a lot like the android from Fritz Lang’s ‘Metropolis.’

Since Lucas financed ‘The Empire Strikes Back’ and ‘Return of the Jedi’ himself, no one needed to be persuaded to OK their production. However, McQuarrie still produced concept art for the two sequels that you can also see in the StarWars.com gallery.