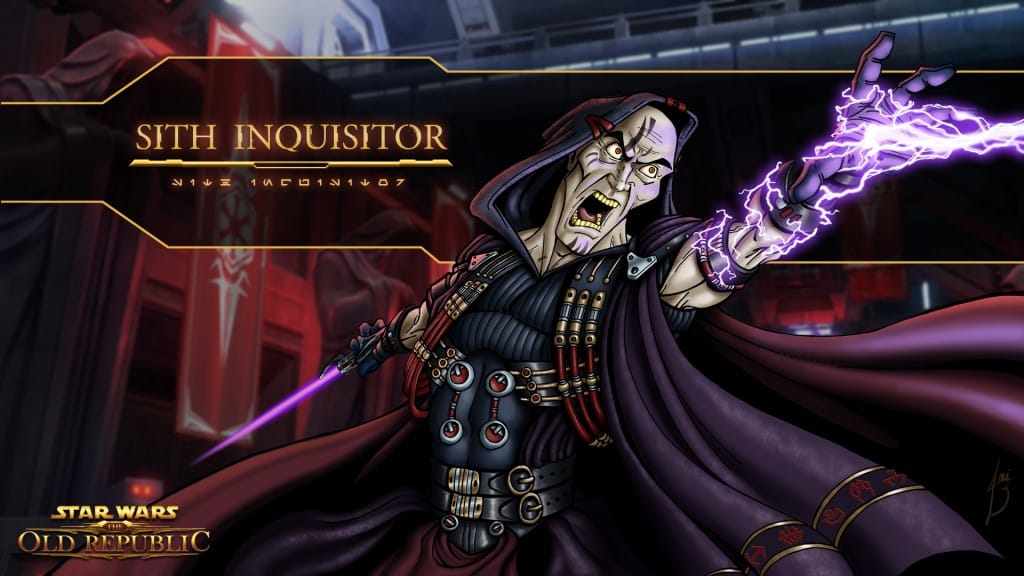 BioWare posted a Developer Blog named “Ascension To Power” What you are about to read is an excerpt from the official Star Wars: The Old Republic Encyclopedia. It will describe an overview of all 3 Acts of the Sith Inquisitor Class story. Although we try to avoid them wherever possible, this excerpt will contain spoilers. Please read at your own risk…

Prologue
Ravaged by the Great War, the Sith Order allows Force-sensitive slaves into its ranks. Most slaves are too weak to complete the trials. But one slave displays incredible cunning and a fearsome talent for the dark side. Begrudgingly instructed by Overseer Harkun, the slave acolyte conquers the trials, dominates a Dashade assassin named Khem Val into servitude, and overwhelms the other students, including a Sith pureblood groomed for success. Despite Overseer Harkun’s attempts to sabotage the slave and preserve the pure Sith legacy, the acolyte triumphs to become a Sith inquisitor. The enigmatic Sith Lord Zash embraces the inquisitor as her apprentice, beginning the former slave’s ascension to power.

Chapter One: Scion of Kallig
The Sith inquisitor answers to Lord Zash, an eerily pleasant Sith Master. At Zash’s bidding, the inquisitor sabotages and ultimately destroys the cyborg Darth Skotia, thus paving the way for Zash to take his place and become a Darth. Zash graces he apprentice with power and sets the Sith inquisitor on a new mission: the recovery of artifacts once belonging to the ancient Sith Tulak Hord. With these artifacts, Darth Zash will complete a ritual to bestow considerable power on Zash and her apprentice.

With the Dashade assassin Khem Val in tow, the inquisitor returns to Darth Zash and interrupts her in the middle of a dark ritual. Zash welcomes her apprentice and reveals her terrible secret: Zash’s youthful appearance is only an illusion – in fact, the Sith Lord is ancient, and her body disfigured by the dark side. Zash now plots to achieve eternal youth by possessing the inquisitor as her next body. But when the inquisitor attacks Darth Zash, the Dashade Khem Val sabotages the ritual – inadvertently trapping Zash’s consciousness inside his body. Despite her best laid plans, Darth Zash is bound within Khem Val and forced to serve the very apprentice she sought to dominate.

Chapter Two: Spirits of the Past
With Darth Zash subdued, the Sith inquisitor inherits her power base and becomes a Sith Lord. But the inquisitor nearly loses everything after being caught in a trap devised by Darth Thanaton, a supremely powerful Sith and harsh traditionalist who bristles at the idea of a former slave rising to sudden influence. To combat Thanaton’s insurmountable strength, the inquisitor learns the ritual of Force-walking and gains power by consuming the energy of Darth Andru, a seething Force spirit locked away on Dromund Kaas. Fueled by the ghost’s power, the inquisitor confronts Thanaton – only to be nearly eradicated by the superior Sith’s dark sorcery.

Chapter Three: Thanaton’s Last Stand
The Sith inquisitor recovers from the violent explosion. Darth Thanaton escapes in the blast while the inquisitor’s allies save their wounded Master from the rubble. The explosion that nearly destroyed them all was sparked by the uncontainable power of the Force spirits bound within the inquisitor. Now the inquisitor suffers from a crippling sickness that will prove devastating – if Thanaton doesn’t land the killing blow first.
The inquisitor explores the far reaches of the galaxy in search of a cure. Meanwhile, news arrives that Darth Thanaton has ascended to the Dark Council and now wields sufficient power to wipe the inquisitor from the galaxy. The inquisitor ultimately cures the sickness to subdue the once-overwhelming Force spirits and wield them as a weapon against Thanaton.