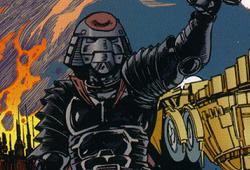 Adas was an ancient Sith warlord who lived circa 28,000 BBY, long before the exiled Dark Jedi of the Hundred Year Darkness conquered his species. He used his knowledge of the dark side of the Force to conquer and subjugate his homeworld, which he ruled as king.Adas, in holocron form, first appeared in a brief vignette featured in the 1996 sourcebook, Tales of the Jedi Companion, written by George R. Strayton. His role and biography was later expanded in 2006’s Evil Never Dies: The Sith Dynasties, written by Abel G. Peña. In that article Adas is identified to have been a member of the Sith species, and to have had interactions with the Rakata introduced in Star Wars: Knights of the Old Republic. Adas’s character would later further be used and expounded upon in 2007’s Jedi vs. Sith: The Essential Guide to the Force by Ryder Windham.

Biography
Due to the charcol-colored pigmentation of his skin, which was unusual for the red-skinned Sith, Adas was considered a chosen being, and was raised as such during his youth. As he grew older, he grew to be substantial in size, and displayed great intelligence, as well as skill in combat. He was also particularly adept in the use of Sith magic. He encased himself in a suit of ebon armor, and was armed with an oversized, alchemically forged battle-ax. Circa 28,000 BBY, Adas took his ax to his fellow Sith in a series of brutal conflicts, eventually uniting and consolidating the disparate nations of his homeworld.

In doing so, Adas became the undisputed ruler and King of Korriban. The general perception held by his people was that he would live forever, with a reign eternal. Over time, Adas was given the moniker of Sith’ari, meaning “Lord” or “Overlord.” He was three hundred years old when Rakatan soldiers of the Infinite Empire moved against Korriban. At first, the aliens taught King Adas how to record his essence into a device called a “holocron,” in an attempt to lull the Sith ruler into their confidence. Putting his newfound knowledge to use, Adas created his own holocron. Eventually though, the Rakatans were more blatant in their actions, and attempted to conquer the Sith. Adas, refusing to tolerate their actions even in his advanced age, led his people in the vehement defence of Korriban, driving back the invaders with his massive ax. However, in securing what he hoped would be a future of freedom for his people, Adas perished.

Legacy
Circa 4,400 BBY, Freedon Nadd first discovered Adas’s holocron and used it to conquer the planet Onderon. Around 4,010 BBY, his Sith holocron was uncovered by Queen Amanoa of Onderon, who learned all the stored secrets. The holocron was then passed to her apprentice Novar to teach Sith initiates. The Gatekeeper of Adas’s holocron, however, had a unique personality that it could turn down the user’s request or even threaten its user. King Adas’s holocron eventually found its way into House Pelagia’s holocron library and subsequently liberated by Sir Nevil Tritum of the Mecrosa Order during the Great Jedi Purge. Following the Battle of Endor the order gave the holocron to Lumiya.