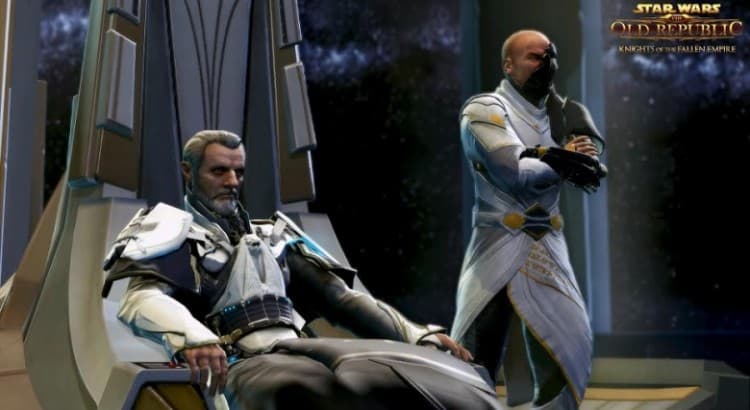 We’re all excited for Knights of the Fallen Empire and with the release date so close, we’re also anxious to see what early reviewers have to say about the expansion. Fraser Brown from PCGamesN had some interesting things to say about the expansion, including that it feels like a single-player game hiding in an MMO. This is technically something that has been said about SWTOR before but let’s go ahead and delve deeper into this KotFE review.

“Knights of the Fallen Empire, then, is a potential course correction, steering the game toward that old pre-launch promise. It’s a mostly single-player expansion, focusing on the adventures of the Outlander, once the hero of the Galactic War, now the one obstacle in the way of the Eternal Empire’s dominance.

It’s a “quintessential Star Wars story,” lead writer Charles Boyd tells me as he walks me through an early key decision in the expansion. And it’s a “return to BioWare story telling in a galaxy far far away,” executive producer Bruce Maclean chimes in. The Empire Strikes Back and Mass Effect 2’s names are dropped, setting the bar very high indeed.

BioWare RPGs have always been about gathering a party to stop a great evil, but it was in Mass Effect 2 where that became the real focus, demanding that Shepard put together a team of aliens and humans, somehow getting them all to agree to go on an impossible suicide mission. That’s what Knights of the Fallen Empire, BioWare hope, is a return to.”

The focus here, as Brown points out, seems to be more on the story, the player experience, and the immersion rather than the MMO, questing side of things. This is what many fans of Bioware-written games are going to appreciate. He adds:

“It’s far more cinematic than I expected, explosive and peppered with cutscenes that give both companions time to shine, rather than sidelining them in favour of the player-character, or just focusing on the one that the Outlander actually has in his party.”

We’re also going to get six new Flashpoints, exciting new missions and much more. While it’s still an MMO and Bioware is sticking by that statement, it is easy to see that the single-player aspect is being catered to with this massive expansion. You can read the full review over at PCGamesN if you’d like but we want to know what you think about this assessment.

Do you like the idea of SWTOR being more single-player driven or do you prefer more MMO-based content and feel?