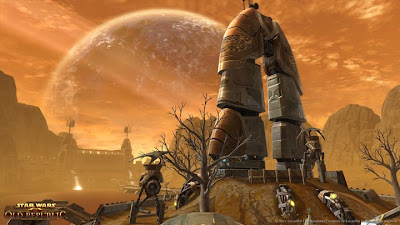 Over on Massively, we found an excellent read on why The Old Republic must succeed, but also why it must fail. It’s a Soapbox column with some very valid points about TOR.

“Disclaimer: The Soapbox column is entirely the opinion of this week’s writer and does not necessarily reflect the views of Massively as a whole. If you’re afraid of opinions other than your own, you might want to skip this column.

So there’s a game coming out called Star Wars: The Old Republic. Maybe you’ve heard about it once or twice.
It’s no secret that a lot of people are excited to see what BioWare’s long-anticipated title will do once it’s finally released. The title has had a huge amount of time and money poured into its production, extensive voice acting, countless demos and revelations and debates… all without having yet amassed a substantial playerbase. What happens when it gets released will have a huge impact on MMOs as a whole for years to come, and even if the developers aren’t calling it a World of Warcraft-killer, a lot of players are expecting just that. And for the good of MMOs as a whole, it needs to be just that — but at the same time, for the good of MMOs as a whole, it needs to fail.”

The column writer, Elliot Lefebvre goes on to back up beliefs of why it must succeed and why it must fail. In why it must fail, he makes comparisons to playing Magic: The Gathering. I remember my high school days of playing in the library on lunch period with the “nerds” and he’s spot on with the comparisons and points made here. It was all presented in a way I could get, too- definitely a plus.

In why it must succeed, he covers the obvious point of because it is so expensive, but delves into some less obvious points as well. It’s worth your time to read it. Let us know what you think!

One thought to “SWTOR: Why it Must Succeed but Why It Must Also Fail”