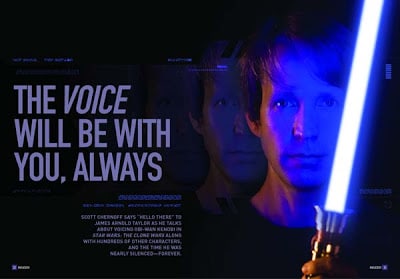 James Arnold Taylor is an amazing voice impersonator and voice-over actor who has a long and talented career. You can take a look at the “Talking to Myself” video he did (Obi-Wan & Beyond“.) when performing at Disney’s Star Wars Weekends 2011, to see for yourself just how talented he is.

It’s amazing how he can be the voice of so many well-known characters and sound so different. If you’re not familiar with the name James Taylor, you’re sure to recognize many of the voices he portrays. Throughout his career, he was the voice of many favorite cartoon characters such as Fred Flintstone and Johnny Test but his talent stretches far beyond cartoons.

He is the voice you hear on many commercials and video games and you might not even know it. He is the voice of the famous Obi-Wan Kenobi in Star Wars. One of the most well known video games where Taylor’s voice is used for several different characters is Star Wars: Clone Wars.

When you think about it, you have ask, could Bioware have saved money on voice acting by hiring this guy? Remember when we brought you all the info on SWTOR voice actors?

Instead of hiring so many different actors to do the voices for the video game, perhaps Taylor could have been the voice for many of them with his “one man show”. But then again, then we wouldn’t have had the lovely Catherine Taber as Vette, right?