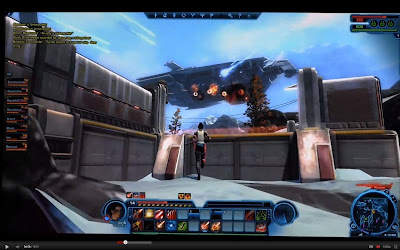 TotalBiscuit uploaded a Trooper gameplay video, showing some nice PVP action from this years Gamescom. I can be totally enthralled by anything as long as TB is commentating, whether it be sports, video games, or peanut butter jar opening.

Also some very interesting points on immersion. I frequently got kind of bored when fighting in other rpg games, where you just hit attack, maybe do some skill attacks, but it’s just basically watching attack animation for a little bit. There’s so much going on in SWTOR, and you can either find cover or move to a better position, instead of just sit there and watch animations. Absolutely love this game already.

While the Trooper was being played well for the most part, I still kept yelling at my TV, ‘Stop moving into melee range you moron!”