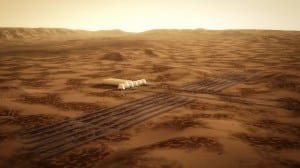 Today I will post a recap of all the documentaries found on youtube regarding Colonization of Mars. There is a lot of speculation, reports and planning for Mars Colonies in the near future, this seems to come out of nowhere in the last few years. Not only by NASA who have always been luke warm ,but several groups and consortiums. Russia, China and now India are planning various missions to the red planet. The Dutch are planning a Big Bros House, and there was an article encouraging older people to apply for first, for possible one way trips in case they cannot come back.

Colonizing Mars [HD]
Robert Zubrin, author and aerospace engineer, has the blueprints to build a colony on Mars. He and NASA Ames researcher Margarita Marinova explain how and why humans will one day turn the Red Planet green, establishing the next frontier of technological innovation and seeding the universe with new branches of life.

This video is one segment of a feature documentary, “Someday Somewhere Beyond”, exploring the history and future of space colonies.

The video below is older and not what is advertised on the label, I thought it was a different documentary about the current race to create a colony on Mars, but it is still a great watch.

More than 100,000 people are eager to make themselves at home on another planet. They’ve applied for a one-way trip to Mars, hoping to be chosen to spend the rest of their lives on uncharted territory, according to an organization planning the manned missions.

The Mars One project wants to colonize the red planet, beginning in 2022. There are financial and practical questions about this venture that haven’t been clarified. Will there be enough money? Will people really be able to survive on Mars? But these haven’t stopped some 30,000 Americans from signing up.
You can see some of the candidates on the project’s website, but they’re not the only ones who have applied, said Bas Lansdorp, Mars One CEO and co-founder.
“There is also a very large number of people who are still working on their profile, so either they have decided not to pay the application fee, or they are still making their video or they’re still filling out the questionnaire or their resume. So the people that you can see online are only the ones that have finished and who have set their profiles as public,” Lansdorp said.
The entrepreneur did not specify how many have paid the fees, completed their profiles and configured them as private.

The intriguing possibility of life on Mars has fuelled man’s quest to visit the Red Planet. Drawing on 45 years of Horizon archive, space expert Dr Kevin Fong presents a documentary on Earth’s near neighbour.

Man’s extraordinary attempts to reach Mars have pushed technological boundaries past their limit and raised the tantalising prospect of establishing human colonies beyond our own planet.

While the moon lies 240,000 miles away, Mars is at a distance of 50 million miles. Reaching the moon takes three days, but to land on Mars would take nearly eight months, and only two thirds of the missions to Mars have made it. The BBC has been there to analyse the highs and lows – including the ill-fated British attempt, the Beagle.

Horizon has explored how scientists believe the only way to truly understand Mars is to send people there. If and when we do, it will be the most challenging trip humanity has ever undertaken.

And here is a few videos for people who were tin hats.

Bob Dean announced in Barcelona the existence of Bases on Mars

In this historical presentation, Bob Dean is at his very finest – and shows a number of previously suppressed NASA images which have impressed us at Project Camelot.

Bob concluded his delivery by stating that there are bases on Mars… and then Henry Deacon (supported by Kerry Cassidy) went up to the stage to state publicly, for the first time, that he had been on Mars. Enjoy.