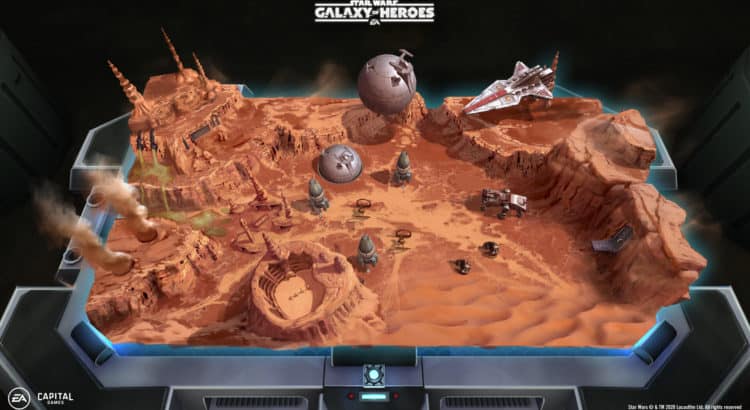 Here is the latest “Road Ahead” write up, from the developers of Star Wars: Galaxy of heroes, over at Capital games. November has a few big items to go over, so let’s dive in.

5th Anniversary
2020 has flown by (or crawled in some instances) and we find ourselves once again in November, which is a special month in Star Wars™: Galaxy of Heroes. As many of you know, it is our anniversary of launching the game. This year is particularly momentous, as we celebrate our fifth year of being live. We are truly thankful to all of the players that continue to play on the holotables with us as none of this would be possible without you. As is tradition, on 11/25, we will be sending players some “goodies” for continuing to make this game great. Capital Games cannot thank you all enough and we look forward to supporting Galaxy of Heroes for many years to come.

Shard Economy Changes
If you haven’t seen our post yet about our upcoming Shard Economy changes, you can read about them here. We’re working on ways of making it easier for you to earn shards, and plan to deploy these changes in time for our 5th anniversary release. While shards are critical for players in order to build a fun and compelling roster, we know many of you have questions around what’s coming next; rest assured there’s more to tackle in regards to the game’s economy but we need to see the results of these shard changes before committing to any future updates. Gear, Ships, and Event rewards are all being closely examined and any upcoming changes will likely be discussed in a future State of the Galaxy or Road Ahead. For the moment, we’re excited to see how these planned changes to Shards will improve the game and inform what other changes we can make in the future.

Mandalorian Season 2 is upon us and we are just as excited as all of you! We’ve kicked off the new season by bringing back two sentimental fan favorites – Kuiil and IG-11 in his nurse incarnation. You’ve already seen their kits and how they play, but we’re excited to see what awesome combinations and squads the community can build with them.

Up next, we continue our season of The Mandalorian content with one of the most requested characters from Season 1 of the show, Moff Gideon! Leading a remnant of the Imperial forces, Moff Gideon is obsessed with obtaining The Child no matter the cost and wields a long forgotten relic from Mandalore’s past. Unlike Kuiil and IG-11, Moff Gideon will be initially unlocked from an upcoming Marquee event and we will have more to share in the coming weeks.

And we’ve still got a few ingots of Beskar saved for some surprises and there may be a few more friends coming from the Mandalorian yet. Stay tuned to see who else shows up to the holotable.

The Future of Galactic Challenges

In August we released a new mode called Galactic Challenges and we’ve been closely reviewing data and community sentiment around the initial release. We’ve been tinkering with different aspects of the mode and have identified some parts of the system that we’d like to update, so starting this December we’re going to be doing an expansion of Galactic Challenge functionality. We’ll be adding Autocomplete functionality, new kinds of Feats, support for new combat mechanics, and we’ll be adding a new End of Event reward mechanic.

To save you time and effort, we’re introducing Autocomplete. This means that successfully completing combat missions and feats at a higher tier of difficulty will now give you credit for any lower tier. For instance, completing tier 5 at 2 star will give you full credit for tiers 1-4 in addition to the stars earned from tier 5. Similarly, completing a feat at tier 5 will give you credit for the same Feat at the earlier levels. Note: we’re moving mission completion into discrete Feats in order to tie into the new End of Event reward system.

With the introduction of the new End of Event rewards, you will now earn a new type of currency from completing combat missions and their associated feats. As you accumulate this currency, you will earn a progressively better chest of rewards which will open at the end of the event.

With the instant payout of rewards, players who complete Challenges up to the higher tiers of difficulty earn all the rewards – even those which may not be applicable to where they are in the game – from the earlier tiers. By making the switch to End of Event rewards, we will be able to improve and differentiate the rewards offered as you progress from one chest to the next.

Lastly, we’re eyeing a major expansion of the Galactic Challenges system sometime in February or March of next year. We’ve got some significant changes we’d like to make, but we’re not far enough along to discuss them yet. We’ll be talking about them in our next Road Ahead.