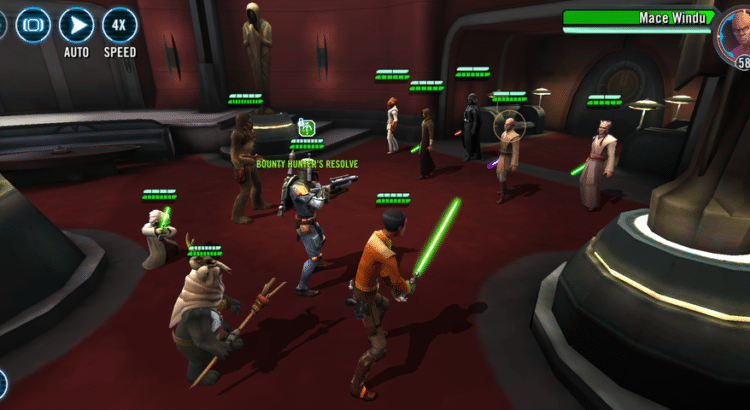 The guys over at Capital Games is starting to share details about the next feature coming to the holotables in Star Wars: Galaxy of Heroes: Galactic Challenges.

The main goal for this feature is to provide more activities for players each day. The developers hear players asking for more ways to use their growing roster of units and want more than just new events that you can master quickly or sim. Galactic Challenges are the first in a series of features (similar to how Grand Arena was the basis for Grand Arena Championships) that will work together to offer new ways to utilize your collection.

We want to keep these bonuses and match ups thematic, but use a variety of options to keep the challenges unique and interesting. For example, Environmental modifiers come from the planet or location and apply to both the player and enemy (e.g. Hoth could have a modifier called Frost Bite that makes all units more vulnerable). Enemy modifiers are tied to the enemy faction, so Imperial Troopers could have a positive modifier called Imperial Assault that gives them offense up, but also a negative modifier called Pew Pew which makes them hit less. Player modifiers can also be positive or negative and applied to the player’s units. The different environments, enemy factions and combat modifiers (positive and negative) combine to create fresh and interesting challenges.

The Challenge in Galactic Challenges:
We’re still working out some of the details (like at what level Galactic Challenges unlock), but our intention is for Galactic Challenges to offer an appropriate challenge for you wherever you are in the game. There will be multiple tiers of increasing difficulty and players can attempt them all to earn rewards, but we’ll recommend a starting tier based on your collection.

In addition to playing the base mission for the tier, each tier may feature Feats. Feats will add an additional layer of complexity to the puzzle, so while you can bring your favorite squad into battle, Feats will challenge you to complete the battle with additional conditions to earn more rewards.

Similar to Grand Arena Championships, we’ll release Galactic Challenges in an Exhibition Season format. During this time, we’ll try out different versions of the event and see which combinations work best – but we’re currently envisioning event durations of 24 hours to 7 days with 7 tiers of difficulty and 3 feats per tier.

That’s all we have for today, but we look forward to sharing more details about Galactic Challenges in future posts!