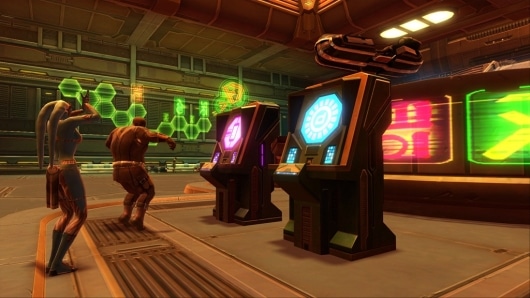 On June 10th, Star Wars: The Old Republic launches Update 2.8: Spoils of War, and the casino event called the Festival of Splendor along with most of the patch already resides on the public test server.  The new event is based on gambling/casino which is not for everyone, of course. If you like casino games and trying your hand at your luck vs. the house, you might not want to do this trick at all. But if you want a way to beat the system, then check this out.

Hyperspace Beacon has found a way to beat the system in this new event. This might be something worth looking into. Here they have an overview on games and prizes:

The Smuggler’s Luck slot machines cost the least. Each token is 1,000 credits and there is a higher chance to win something. According to SWTOR_miner on Reddit, every time you play you only have 29.68% chance of losing. Most of the time you will earn your token back (50%). Then you have a 10% chance to get your token back and get a “Feeling Lucky” buff. (More on that later.) You have a 5% chance to get a Kingpin Token or double your chips back. But what about the other .32%? The Jackpot on the Smuggler’s Luck slots is a Golden Certificate that you can use to buy items from the vendors. Players have a .3% chance of getting one of those, and if you’re really (un)lucky your slot machine could explode (.02%).

At the Kingpin Slot machines, you get the real prizes. At the vendor the tokens cost 50,000 credits — obviously, for the high rollers. Your chances of winning improve if you have the “Feeling Lucky” buff from the Smuggler’s Luck machines. Your most likely scenario is to get a free token if you don’t have the buff (50%). But just under that are the two lose scenarios at 22.83% and 22.85% chance. But you do have a 4% chance to win a certificate, which is much better than on a Smuggler’s Luck machine. You can also win a Vectron Opus speeder (.23%) or the ultimate prize, the Kingpin Rancor (.07%). Of course, you also have a .02% chance that the machine will explode.

And then Larry goes on to describe the risk and reward and of course, his strategy. It’s worth giving it a read through, especially if you’re not big on the house always winning or your odds at the casino. Larry shares his experiences with this on the PTS so give it a read and then try it out for yourself once the update is live on the servers.