Random House has a good chunk of the first chapter of Drew Karpyshyn new novel Star Wars: The Old Republic: Revan up on its site. Critics haven’t been nice on the book so far but so far they have all be unofficial reviews.

Any ways, here is a chance to check it our for yourself:

LORD SCOURGE RAISED the hood of his cloak as he stepped off the shuttle, a shield against the wind and pelting rain. Storms were common here on Dromund Kaas; dark clouds perpetually blocked out the sun, rendering terms like day and night meaningless. The only natural illumination came from the frequent bursts of lightning arcing across the sky, but the glow from the spaceport and nearby Kaas City provided more than enough light to see where he was going.
The powerful electrical storms were a physical manifestation of the dark side power that engulfed the entire planet–a power that had brought the Sith back here a millennium before, when their very survival had been in doubt.
After a crushing defeat in the Great Hyperspace War, the Emperor had risen up from the tattered ranks of the remaining Sith Lords to lead his followers on a desperate exodus to the farthest reaches of the galaxy. Fleeing the Republic armies and the relentless revenge of the Jedi, they eventually resettled far beyond the borders of Republic-charted space on their long-lost ancestral homeworld.
There, safely hidden from their enemies, the Sith began to rebuild their Empire. Under the guidance of the Emperor–the immortal and all-powerful savior who still reigned over them even after a thousand years–they abandoned the hedonistic lifestyles of their barbaric ancestors.
Instead they created a near-perfect society in which the Imperial military operated and controlled virtually every aspect of daily life. Farmers, mechanics, teachers, cooks, janitors–all were part of the great martial machine, each individual a cog trained to perform his or her duties with maximum discipline and efficiency. As a result, the Sith had been able to conquer and enslave world after world in the unexplored regions of the galaxy, until their power and influence rivaled those of their glorious past.
Another burst of lightning split the sky, momentarily illuminating the massive citadel that loomed over Kaas City. Built by slaves and devoted followers, the citadel served as both palace and fortress, an unassailable meeting place for the Emperor and the twelve handpicked Sith Lords who made up his Dark Council.
A decade earlier, when Scourge had first arrived on Dromund Kaas as a young apprentice, he had vowed to one day set foot inside the citadel’s exclusive halls. Yet in all his years of training at the Sith Academy on Kaas City’s borders, he had never been granted the privilege. He had been one of the top students, marked by his superiors for his strength in the Force and his fanatic devotion to the ways of the Sith. But acolytes were not permitted inside the citadel; its secrets were reserved for those in direct service to the Emperor and the Dark Council.

The novel, which tells the tale of the popular video game character after the events of Knights of the Old Republic, is due for release on November 15. 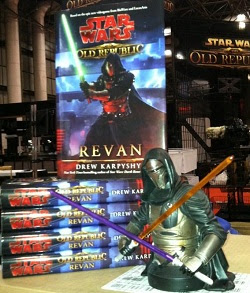