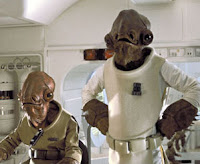 San Francisco’s SFGate.com has a rare video interview with KPFA radio dramatist Erik Bauersfeld. For those not up on their Star Wars trivia, Bauersfeld is the voice of Admiral Ackbar from Return of the Jedi. He is responsible for the iconic “It’s a trap!” line and he was also the voice of Bib Fortuna and he even auditioned for the voice of Yoda.

Here are some interesting facts from the interview:

When the movie first released, he wasn’t listed on the cast but has been credited since then.
He was unaware that his famous line had become an Internet meme.
He’s still never seen the original “Star Wars”.
He saves Star Wars fan letters in a filing cabinet and writes a personal response to each one.

Here is a few more videos you should checkout: