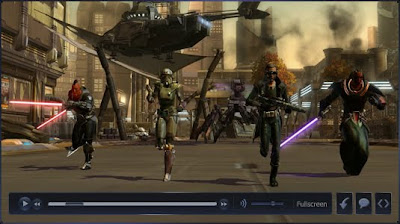 BioWare has used this Friday update to release a new Trailer for Star Wars: The Old Republic. The video was also shown at yesterdays official SWTOR Comic-Con panel discussion. The trailer is made up of only in-game footage and looks really nice.

We are excited to present Join the Fight, an all-new in-game trailer for Star Wars™: The Old Republic™ that premiered at San Diego Comic-Con 2011.

The uneasy peace established by the Treaty of Coruscant is broken and both the Galactic Republic and Sith Empire build their armies. As both sides prepare for open war, a new generation of heroes must rise up to meet the challenges of a volatile age, declaring their allegiances and fighting for what they believe in.