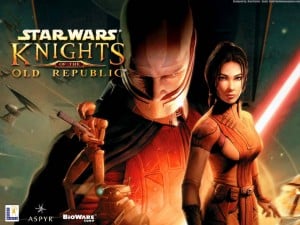 Will there be a Star Wars Knights of the Old Republic movie? Many fans would be ecstatic to hear this is true but we can’t find any evidence that it’s valid. With Star Wars spinoff rumors in the mix, it’s easy to see how some could quickly believe this one might be true but Karpyshyn himself said on Twitter that he knows nothing about it.

@agentjaspor @headgeek666 this would be awesome, but I haven’t heard anything about a #KOTOR movie. But I’m not at #bioware anymore so…

Ain’t It Cool News, cited sources at BioWare and said that Karpyshyn was secretly working on a screenplay for a Star Wars: Knights of the Old Republic feature film being developed by Lucasfilm. It’s a nice thought but doesn’t seem to be true. However, this wouldn’t be the first time a rumor was denied when it was leaked too soon. However, since Karpyshyn is no longer at BioWare there doesn’t seem to be a lot of weight behind the rumors.

Alas, the KOTOR movie rumors appear untrue. AICN updated their report  to say Karpyshyn told them that he “has heard nothing about a Knights of the Old Republic movie. Of course even if he was working on it, he couldn’t say so – but I’m going to say this looks like a rumor that we can put to rest for now. His old workmates at BioWare were hoping it was true, but there was more hope than reality to the rumor. Consider this one shut down for now.”

True or not, would you want to see a Star Wars Knights of the Old Republic movie? Hypothetically speaking, who do you think should play in it?