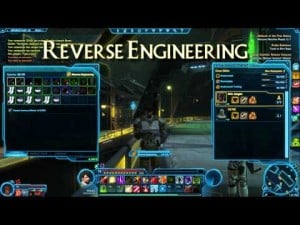 Reverse engineering mods is expensive, especially when you are trying to build up a nice stock of schematics to place on the GTN. When you’re a new player trying to gear up, this can be a real hassle. But there has been a new “trick” found that makes it a little bit easier by bypassing this altogether. The real question is: Is this an exploit?

As is already known, when you try to RE other people’s crafted mods, it says no research available, however, as I pulled out a mod that I know I bought off the gtn a few months ago to replace with a better one, I noticed that it said 20% chance to research a schem available. Out of curiosity, I threw the new mod that I just bought off the GTN into my armor, then pulled it out, same thing, research available. I didn’t need the original mod that I pulled out, so I RE’d it for mats, didn’t get a schem, but it did say research available. I also noticed that once you pull out somebody else’s crafted mod from a piece of armor, the crafter’s name is gone, in addition to the 20% research chance appearing. Since I only have done this once and won’t be doing it again until I get better mods, I was wondering if anybody else has tried this with any success for a schematic? Just buying a mod off the gtn, throwing it into armor, pulling it out, then REing it for a schematic. I’m not sure if this is a glitch, as in there’s NO research available, but the system is glitched and thinks that there is or if by putting the mod into the armor, it changes from a crafted mod to a generic mod and thus becomes researchable. Any feedback on this would be greatly appreciated!

While it sounds all well and good, of course some players want to know if they are going to get in trouble with BioWare or risk account action for doing this little trick. So Allison came in to clear up the matter.

We’ve seen players ask about this before, and have some clarification for you from Jason Attard (Senior Game Balance Designer):

So basically they are telling us that while they did not intend for this ability to be in the game, they’re not removing it right now and it’s not considered a violation of the rules if you use it. So go ahead and go for it (while you still can!).

For the thread in full, head over to the official forum.