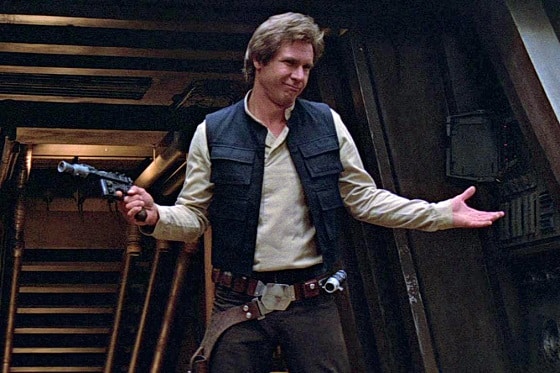 Are you worried about the upcoming Han Solo spinoff that is planned as a standalone film? Many fans are concerned that they will ruin one of the best characters from Star Wars ever.

In an interview with Entertainment Weekly, Lucasfilm president Kathleen Kennedy talked a great deal about the spinoff (still untitled) and what we can expect. It’s written by Jon and Lawrence Kasdan, directed by Phil Lord and Chris Miller, and scheduled for release May 25, 2018. So we have quite awhile to wait for it but that doesn’t stop people from being interested in it.

A big question from the start is in regards to the timeline. How old will Solo be in this film?

“He’ll definitely be probably in the high teens, low 20s,” Kennedy said to the magazine. “We’re not introducing you to a 10-year-old Han Solo.”

That does make sense and we’ll have to wait awhile to know who is playing the role but Kennedy did offer some other info and insight into the upcoming film and what we can all expect.

There’s got to be a reason for [the stand-alone film] to be. And obviously the thing that Star Wars has always done so well is it doesn’t spend a lot of time [explaining] the stories that have come before. We don’t want to do that either. We don’t want to spend time going back and answering a lot of questions that, quite frankly, I don’t think people want answered.

This news alone is enough to calm most fans.

I think the key here is that we are identifying an event or events in Han Solo’s life that gives you some idea of who he is and why he is the character we have all known to love.

Kennedy goes on to really squelch those fears with this comment. This is what we really want to see from a movie about the character. This is spot on!

Then she also tells us about the humor we can expect in the final film. You’re going to see Solo wit and adventure.

You can imagine, given who we’ve chosen to come in and direct, it should be very entertaining and funny. Han Solo is the character inside Star Wars that everybody knows has a wit and sense of humor. So that’s what this should be.