We have all seen the trailer for the Rise of the Hutt Cartel but in true Dulfy fashion, she breaks it all down for us so we can understand just what is coming and how it correlates to things we have been previously told by the devs.

In this dissection, she talks to us about lore, gear, skins and more. Her breakdowns come complete with stills from the trailer to illustrate what she’s talking about. Here’s a snippet:

10) The frame after that shows what I think is the spaceport for the “city” in Makeb. You can see small shuttles flying in/out. This was the background used for this high res screenshot on swtor.com 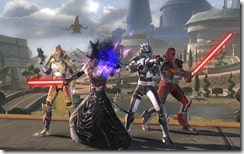 The armor and weapons used by the four characters on the high res screenshot is interesting. The 1st and 3rd character from the left doesn’t have new armor models. They are using the Empire version of the rated War Hero Combat Tech with colors unified to the chestpiece and the Empire version of Elite War Hero Field Medic respectively. I have not seen the armor worn by the 2nd and 4th characters from the left.

The weapon used by the Imperial agent is an existing model – you can find it on the GTN as Prototype Huttese Sentry Rifle. I am not sure if there is a moddable version of it.

It’s really an interesting look at the video and what it tells us about the upcoming changes and additions to the game and Makeb. If you haven’t read it, head on over here to Dulfy’s site and check it out.

And here’s the video again in case you missed it, too.