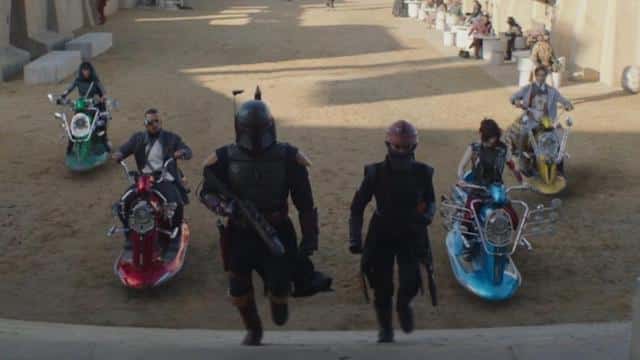 This episode has caused quite a stir in the fanbase. Ultimately I get why people are upset. Whilst you should never have to perform mental gymnastics to make sense of something. I do think that there are ways of making these things understandable with just a little thought.

They just joined Boba in an instant without thought: The thing is though desperate people will do anything if it means work. Besides they’re no doubt gonna cause trouble if you don’t control them. Why risk being enemies when you can turn them into an asset by hiring them?

Punk kids with scooters: Often called 1970’s Vespas as I’ve seen people call them. Comments have been made they would fit more on Coruscant. Well these street kids could very well be from Coruscant or somewhere similar where they’re speeder and dress sense fit in or perhaps at least bear resemblance to they’re home planet. They’re offworlders that relocated to Tatooine. They knew they’d stand out there and be free from whatever ‘society’ they stand against. They do have an edgy/cringe vibe though I’ll give you that.

You also have to consider Robert Rodriguez’s creative choices. The vibrant colour palette is probably inspired by his movie Spy kids. Of course directors want to put they’re own mark on SW. I do think they could of dialed down the design a bit.

Criticised as slow for a chase but I think it fits remember this is the streets of Mos Espa not the track for the Boonta Eve Classic. The streets are narrow and populated. If you go too fast the chase will be over before it even begins. Then factor in the casualties if they did. Think of the problems it’ll cause for both Boba and the mayor. that’s no way to gain respect. “Sorry for running over your parents. Will a thousand credits cover it?” As much of a slime the Mayor’s Majordomo is he seems like too much of a coward to kill people just to get away. They made a mess of the fruit market though but that can be easily fixed with a generous donation as compensation.

Boba’s weakness: Caution I’d call it. He’s being careful not to rile up the locals. Hence why he seems incompetent. He doesn’t need a rebellion right now.

Judging from they symbol at the camp. It’s clear that the Nikto sand riders killed the Tuskens. It’s simple payback. Boba did kill they’re boys at Tosche station and steal they’re rides. He doesn’t want to repeat his mistake and cause more unnecessary death.

BK is ruthless but he has worked with boba before so possibly bounty hunters sentiment/respect? Wookie could of just wanted an honest fight and didn’t think about the consequences of making alot of noise in the process. Or just a case of the famous plot armor we’re all familiar with. (Can’t kill Boba in his own show).

It is a bummer about the twins backing out unless they are waiting for the pykes to kill boba for them but hey at least boba has a rancor to parade around on now.