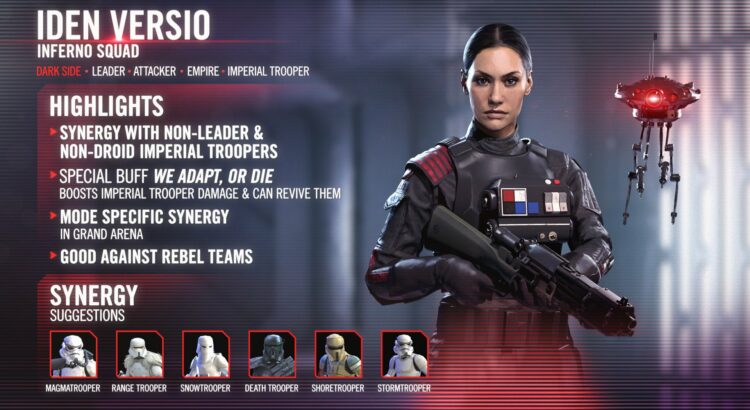 The guys over at Capital Games has posted a new developer insight. This time they are talking with the designers of Iden Versio. After the attack on the Death Star, the Empire responded by assembling Inferno Squad – an Imperial Special Forces commando unit – and appointed Iden Versio as its leader. Now, Iden’s intelligence and relentlessness will be put to use as the newest Imperial Trooper leader to hit the holotables.

Basic: TAKE THEM DOWN

FINAL TEXT: Deal Physical damage to all enemies and inflict Vulnerable for 2 turns. Dispel all buffs on target enemy and inflict Healing Immunity for 2 turns and Stun for 1 turn. These effects can’t be resisted by Rebel enemies. If no other allies have the Leader tag, call all other non-Droid Imperial Trooper allies to assist, dealing 20% less damage.

Special 2: WE CAN GRIEVE LATER (Cooldown 4)

If no other allies have the Leader tag, all non-Droid Imperial Trooper allies gain We Adapt, Or Die for 3 turns, which can’t be copied.

At the start of battle, if no other allies have the Leader tag, whenever a non-Droid Imperial Trooper ally attacks out of turn, they gain 2% Offense (stacking) until the end of the encounter, Critical Damage Up for 2 turns at the start of each encounter, have +100% counter chance, and while enemies are Vulnerable, they have -25% Speed.

Unique: FIRST IN, LAST OUT
FINAL TEXT (ZETA): If no other allies have the Leader tag, and all allies are non-Droid Imperial Troopers, Iden gains 100% Turn Meter at the start of each encounter, and whenever she is defeated she revives with 100% Health and Protection if there is another active Imperial Trooper ally.

While Iden has Protection Up, she has +30% Potency. While she is active, Imperial Trooper allies have +30% Offense.

Below, we take a dive into the developers’ motivations and inspirations while creating the kit for this fan-favorite Battlefront II character.