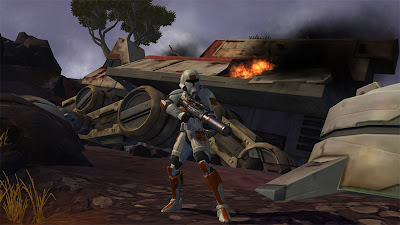 Bioware  has released another fantastic trailer video, for Star Wars: The Old Republic. This time it’s of the ultimate muscle class “The Republic Trooper.”  Even though the Troopers as a character are soldiers of the Republic following orders from a higher authority and personally I can’t follow the orders, but as I seen them throwing down in the fray of blaster fire as they reveal mini guns to sweep the entire group, man that was awesome.
I have to say that the armor’s special ability to push back their enemies after being surrounded is one sweet move.  I thought about favoring the Bounty Hunter or the Smuggler as my first choice, but this video makes me rethink my decision.  Even if you choose a force user as your first choice I’d rethink that plan to take on the Trooper head on.

May The Force Be With You All.