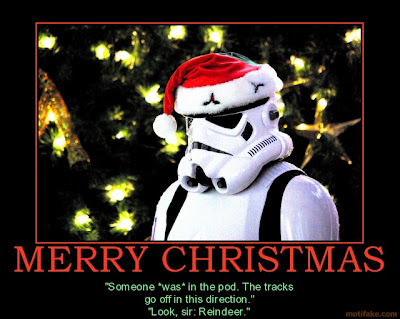 It’s Christmas time, and while today that means people grinching about whether or not you should say “Happy Holidays” instead of “Merry Christmas,” there was a time when the biggest issue people had was which televised Christmas special they were going to watch. We’ve all seen the one with Rudolph and that one with the Heat Miser, and I’m sure the amount of hours spent watching the adventures of Frosty the Snowman would be shameful. Though those were all enjoyable when we were kids, we haven’t had a real grown-up Christmas special in a long time. That’s where this video comes in.

Because you guys have been so good to us all year, and because we know you all love Star Wars as much as we do, we just had to cut our own version of a Star Wars Christmas Special. So instead of getting a card in the mail, think of this as our holiday greeting for you. We had a good time cutting this togetther, and hope you enjoy it.

Written by: Dom Moschitti, Nick Murphy, Paul Ritchey, and Luke Brown
Directed and Produced by: Nick Murphy and Paul Ritchey
Voice Over by: The Staff of Gamervision.com