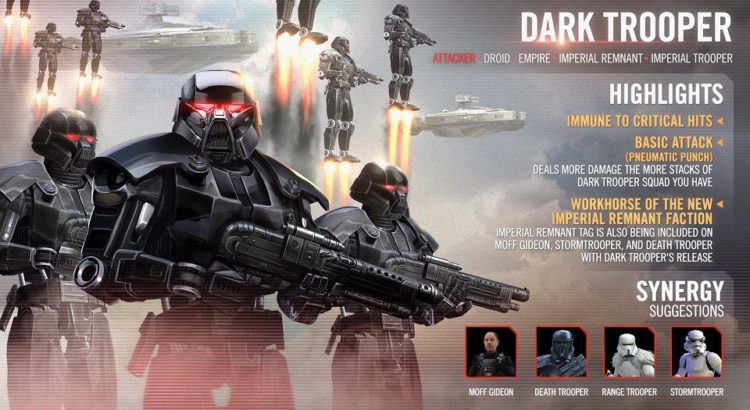 The guys over at Capital Games has posted a new developer insight. This time they are talking with the designers of The Dark Trooper and how they went about creating this iconic characters from the Star Wars universe.  Check i out.

FINAL TEXT: Deal Physical damage to target enemy once for each stack of Dark Trooper Squad. This ability can’t critically hit unless this unit has Advantage.

The Dark Trooper, Moff Gideon’s menacing enforcer, is making its way to the Holotables! The foreboding and unrelenting droid trooper keeps the most skilled warrior’s hands full as it will stop at nothing to defeat its enemies and bring glory to the Empire.

Dark Trooper will usher in the new “Imperial Remnant” faction tag and bring the new Dark Trooper Squad buff to the holotables, which mimics the squad-based deployment seen in The Mandalorian. Dark Trooper can also dole out Advantage, Turn Meter and Offense Up to allies while giving itself increased Defense for more survivability during the fight.

Alongside Dark Trooper, Moff Gideon, Death Trooper and Stormtrooper will be given the “Imperial Remnant” tag, with the latter two receiving kit touch-ups to make them even more powerful within their new faction.