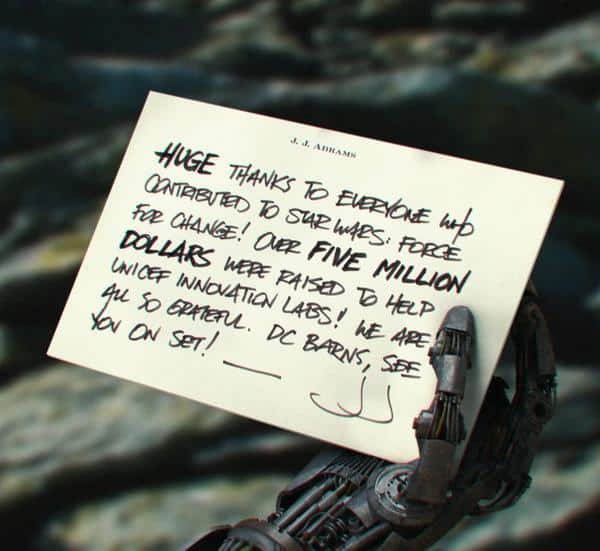 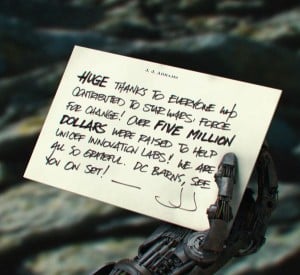 You may remember several months ago when JJ Abrams kicked off Star Wars: Force For Change, with the intent of raising money for the United Nations Children’s Fund (UNICEF). The grand prize was a trip to the set of Star Wars Episode VII and you better believe there were a lot of fans who wanted a chance to win. Slashfilm.com has an interesting update for us, as well as some details on the “droid hand” Abrams teased in the announcement.

The first video revealed a brand new creature from the world. A second video revealed the new X-Wing fighter. And now, Abrams revealed the results of the initiative and winner’s name with another excitingly cryptic photo. Is it a Episode 7 droid hand? Or perhaps Luke Skywalker’s robot hand? Check it out and read more about the Force for Change winner below.

And here you can see the Tweet for yourself if you missed it before:

So what do you think about that droid hand?

Slashfilm had some thoughts of their own:

We know Abrams and his crew were recently on the Irish island of Skellig Michael, which looks very much like the background there. Outdoors, beautiful exposed rocks, etc. The rumor was Mark Hamill and Daisy Ridley were on set for that. So the obvious thought is: Luke’s hand! There are a few problems with that, however. Most importantly, 30 years ago, Luke’s hand had skin on it. If a previous rumor about Luke is true though, the lack of skin could make sense. But I don’t buy it.

I am not sure about the hand but I do know that this contest raised over $5 million for UNICEF so that’s a pretty awesome victory!