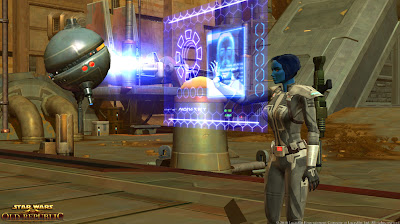 swtor.com updated with the next chapter in their Blood of the Empire webcomic: Act 2: The Broken World Chapter 1:

Act 2: The Broken World – Teneb Kel has received his mission from the Dark Council: Find and slay the Emperor’s traitorous apprentice, Exal Kressh. But can one young Sith defeat a master of the dark side? And what are Exal Kressh’s true plans for the Emperor and the Empire? Jedi, slaves and Sith alike clash in act 2 of Blood of the Empire.

In the fifth issue of Blood of the Empire, Teneb Kel comes face to face with Exal Kressh, the Emperor’s apprentice! But what power does she possess, and what secrets will she reveal to the man sent to kill her? Meanwhile, Maggot’s night off continues, and new faces observe from the shadows. It’s the beginning of a night full of revelations...


And we also get a special Fan Friday, in the form of an E3 Wrapup:

It has been a sensational week for The Old Republic at the E3 Press Conference! Thanks to everyone for checking in throughout the week and supporting The Old Republic. It’s inspiring to see the community charged up with excitement for this game. Thanks for all your support!

Sean also took the time to provide sort of a manifesto to fans who might be a little over-zealous in their vocalization of what E3 brought:


I got up at 4am this morning to get back to Austin so I’ll make this short and sweet instead of rambling on as I tend to.


SIDE NOTE: While we aren’t talking about it yet (and I know many of you dislike this but there are various and valid reasons why we do this), we are not saying that you can ONLY be a Twi’lek as a Smuggler. What we are saying is that we are CONFIRMING that as a Smuggler, you can choose Twi’lek as a species. Will there be limitations? Yes, there will be. What are they? We aren’t talking about that yet because we haven’t come to a final conclusion on some things yet. When we do, you will definitely know but in the meanwhile we are only confirming what we know will not change between now and launch. Back to the point…


We all think it’s awesome that we have so many dedicated fans. We really do. We only get to meet a fraction of them and the ones we do are amazing. Just this last week I got to personally meet a wide variety of people who participate in these forums on a consistent basis and it was great to see their excitement for TOR. And it’s great to see everyone pull together and share all the information they gleamed from each and every interview they could find across the web (and sorry that my interview didn’t really have any big reveals or anything in it).


But, like I said, our updates are crafted for the entire community and while a segment may learn everything before even the first day of E-3 (and some even before the Pre-E3 Press Event, ack!), a large portion of our community doesn’t learn about things until later and usually when we are informing them of the updates by posting them on our website and the social networks we participate in.


Now, I know some of you will disagree with me (I have been reading the threads and posts between shifts when doing demos and at night), I personally believe we revealed a lot this week:

And that’s not even counting all the information and things talked about during the various interviews. Granted, I’m seeing things from my point of view, but I think we did a lot over the last five days.


Hmm, and maybe I should go back and remove the part about me not rambling… because I think I ended up doing that after all


Quick Edit: And no, not asking for you guys to thank us or anything else. I am just trying to give a little more information on why things are they way they are based on some of the posts I have been reading over the last week.

Rob Chestney also made a post on the the official forums where he gives some explanation on the standard MMO roles seen in one of the gameplay videos:


This is a great thread and it’s nice to see so many of the discussions that take place within BioWare echoed among the fans. I’m actually in the booth now helping play through these demos (as the Jedi Knight–woot!), and this thread grabbed my attention. A lot of good points have been made already here to clarify what the multiplayer demo implies and what the takeway is, but I think it’s worth a few more comments:


– For the purpose of this multiplayer demo, we wanted to keep the ‘team combat dynamic’ simple and easy to understand. Furthermore, the Consular acts as the healer and as the ‘camera’ for the demo, so she isn’t necessarily playing exactly as she would in a normal playthrough. We wanted her to stay back from the action to provide a wide-angle view of the entire scene. Thus, where she might have run into to strike a few blows for righteousness in a regular group battle, she has to minimize that to keep the view right.


– One of the other things to keep in mind is that these are level 8-10 level characters, and none of them have begun to train as “advanced classes”. New strategies for team combat develop as characters get new skills, get higher level powers, and select specializations. Keep in mind also, that the demo is designed so that people who may not be MMO veterans can understand it also.


– There also seems to be some confusion about the primary classes being locked into primary roles. The Sith Warrior has two advanced classes; the Juggernaut and the Marauder. One is a better track for a ‘tank’, the other is more of a damage-dealer. The paradigm of advanced classes is designed to provide branching options so that all primary classes have at least two options for the types of role they will play in groups. Beyond that even, there are further specialization/customization options that will give characters additional variety in the types of roles they can play.


To sum up, don’t assume too much from one example of four-player team combat that we’re showing at E3. We hope you like the team dynamic we’re showing to folks here, but we don’t want you guys to read too much into it. At a later date, we’ll definitely try to show you some different strategies and team dynamics so you can get a better idea of the breadth of the experience of team combat in TOR.


Eventually, we look forward to you guys getting your hands on the game to find out for yourselves!