So far we’ve only dropped hints about the range of playable species in Star Wars™: The Old Republic™. You may have heard about the Rattataki Bounty Hunter, Chiss Imperial Agent, or the Twi’lek Smuggler, but we can tell you now that all classes will include optional non-human species.

Sith Purebloods are “the red-skinned descendants of such notorious Sith Lords as Naga Sadow and Marka Ragnos.”  SW:TOR is the first video game allowing players to choose the original Sith as a playable race. Sith Purebloods originated on Korriban and later settled on Ziost and were enslaved by exiled Dark Jedi. 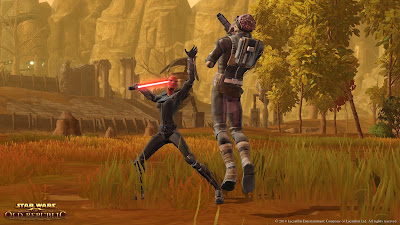 Sith Pureblood
Next, the Miraluka are available as Jedi Knights since their race uses the Force to see the world.  The Miraluka actually only have vestigial eye sockets and come from a world with no visible light waves.  They see the world “entirely through the Force.” One of the most well known Miraluka’s was Visas Marr from KOTOR II. Their adopted homeworld was Alpheridies, a planet the Miraluka migrated to when their original homeworld was rendered uninhabitable. A colony world of the Miraluka named Katarr was stripped of all life by Sith Lord Darth Nihilus in approximately 3,952 BBY, during a Jedi convocation. 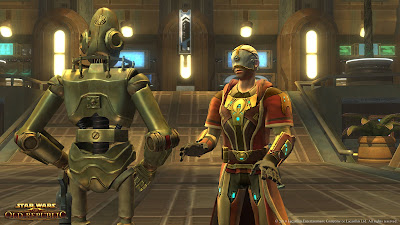 Miraluka
The Mirialan option is open for players wishing to be Jedi Consulars.  This green-skinned race often has facial tattoos and is known for being extremely agile.  “They are also respected for their patience and insight.” Mirialan is native to the planet Mirial. The Mirialan people were religious and practiced a primitive understanding of the Force. They believed each individual’s actions contributed to their destiny. A Mirialan would place a unique, often geometrically repeated tattoo on their face and hands to signify that they had completed a certain test or task, or achieved sufficient adeptness at a certain skill. The number of tattoos would thus often act as a good indicator of how mature and/or skilled a Mirialan was. 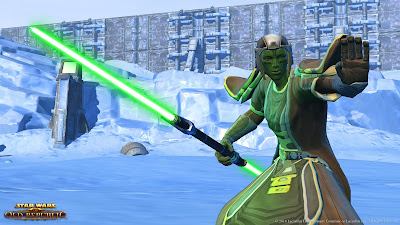 Mirialan
Finally, the Zabrak  can become Sith Inquisitors.  They are “self-reliant and aggressive” making them ideal candidates for intimidating everyone around them.  The species is native to Iridonia, an unforgiving and inhospitable planet.  They are a race known for having a fierce sense of self-determination and an equally dominant need for independence. 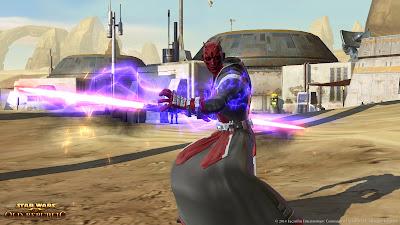 Zabrak
These new races, along with the previously announced playable races, only make up a fraction of the races players will see in SW:TOR.  Keep an eye out here and on the official site for more details on SW:TOR and its diverse playable races.

Among the most exciting character types you’ll be able to choose from is the Sith Pureblood. For the first time ever in a video game, Players can choose to be a member of the original Sith Race, the red-skinned descendants of such notorious Sith Lords as Naga Sadow and Marka Ragnos. The rage of these fallen ancestors of the Sith Pureblood lives on in the Sith Warriors who dominate the battlefield with their intimidating presence and aggressive tactics.

A near-human species with unrivaled strength in the Force, Miraluka can become powerful Jedi Knights. Hailing from a homeworld with no visible light waves, the Miraluka evolved to see their surroundings entirely through the Force. To cover their vestigial eye sockets, they wear veils and blindfolds that range from colorful to austere. Miraluka Jedi Knights charge into battle with the Force guiding the graceful attacks of their Lightsabers to always hit home.

As one of the most wise and mystical species in the galaxy, the green-skinned Mirialans can become powerful Jedi Consulars. Mirialans are known for their symbolic facial tattoos and natural agility. They are also respected for their patience and insight. Mirialan Jedi Consulars lead Republic Forces into battle with assurance and harness powerful Force energies to defeat their enemies.

Among the slaves serving the Sith Empire, there are many aliens with Force potential, but few species have the grit to join the ranks of the Sith. A proud species from an inhospitable world, Zabraks are among the few with the determination and ferocity to become Sith Inquisitors. Sporting horns and facial tattoos, these fierce aliens are self-reliant and aggressive. Zabrak Sith Inquisitors intimidate both their enemies and their colleagues with their fighting prowess and ruthless command of the Force.

As excited for these playable species as we hope you are, the list is not yet complete. We look forward to announcing further options in the coming months. We will also have additional details on the species above, so check the Inhabitants section regularly to make sure you get the latest information available.