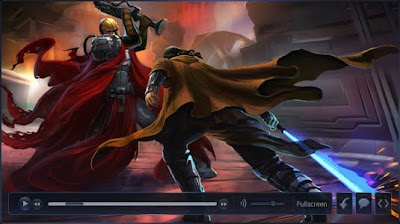 Star Wars: The old republic Timeline trailer 9: The Mandalorian Wars, has just been released.  Since the last timeline told us about Revan and Malak and the events of Knights of the Old Republic, we are now presented the bloody wars, which were responsible for KotOR events: the Mandalorian Wars.

In this timeline Bioware basically made everything that happened in Kotor 2 Vapor-Ware and made their own story canon. So Exile didnt really do anything with Malachor V, it was all Revan. Carth Onasi Also get a mention in this timeline trailer though.

The Mandalorian Wars included some of the bloodiest battles in the Republic’s history. Mandalore the Ultimate’s relentless campaign to goad the Jedi into open conflict cost the lives of millions. Though the entrance of a Jedi splinter faction into the war is perceived as the factor that turned the tide against the Mandalorians, the perseverance of Republic soldiers and pilots like Carth Onasi cannot be underestimated. Jedi Master Gnost-Dural’s historical investigation analyzes the conflict with the perspective of modern events, highlighting the implications for the war against the Sith Empire.

BTC 311 – Too often, the Mandalorian Wars are characterized solely as a prelude to the Jedi Civil War, but the events surrounding the conflict itself bear close examination. When Mandalore the Ultimate called together the clans and began augmenting his armies further with Neo-Crusaders, his intention was to pull the Jedi Order into open conflict. As is the tradition in their culture, the Mandalorians sought to establish themselves as the most powerful faction in the galaxy by defeating the faction they considered to be their greatest rivals. Though the Jedi Council resisted the Mandalorian challenge, the splinter group led by Revan and Malak eventually joined the fray and won the war. Though there has never been a hint that the Sith were involved in the Mandalorian Wars, new analysis from Jedi Master Gnost-Dural suggests that the influence of the dark side was involved. The bittersweet victory in the Mandalorian Wars took a toll on the Republic for which the price is still being paid to this day…