It’s time for BioWare’s regular Friday update on the Star Wars: The Old Republic site, and this one’s pretty massive. BioWare took pity on the many fans who have been clamoring for gameplay information and released an All Imperial Agent Extravaganza including a new class gameplay video:

The update gives a little more detail on the Agent’s advanced classes: Healing skills are confirmed for the Operative just as his specialization on close-range combat. In contrast to the Sniper, who’s more into stealth and ranged combat. He frequently makes use of his long range blaster rifle, although it seems that one needs “extensive training” to make use of this weapon.

Combining the expertise of multiple disciplines, Operatives adapt to any environment and any circumstance to ensure the Empire’s agenda is achieved. Whether emerging from stealth to ambush and eliminate enemies in close-range combat or using advanced medical technologies to keep colleagues in the fight, the Operative is able to identify the needs of any situation and react accordingly. 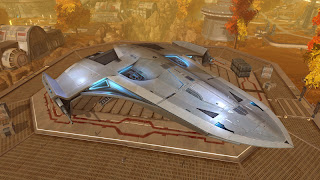 The starships of the Imperial Navy are the product of centuries of military research and development. The Empire designed its fleet to destroy the Republic as quickly and efficiently as possible. During the years of the Great War, however, the Empire refined its design strategies. Co-opting newly discovered technologies and revising blueprints according to lessons learned, Imperial engineers built a new generation of starships. First among these, Imperial Intelligence commissioned the X70B-Phantom—the most low-profile, high-tech starship the galaxy has ever known. From its radar-resistant sleek exterior paneling to the next-generation navigation systems, the Phantom is so far ahead of its time that mass production would never be possible. More likely, the experimental prototypes built so far will be designated for critical Intelligence missions, and entrusted only to the most professional and responsible Imperial Agents.

I must say that I’m really liking the sound of the Imperial Agent class. It’s definitely going to be my class if I play Empire. In fact, I’m considering switching my main to it (though the lure of the lightsaber is strong). I mean, I just love the sleek design of that ship, just look at it:

Last but not least, the Imperial Agent get’s a deadly Rattataki companion named Kaliyo Djannis. For at least a decade, she’s worked as a freelance enforcer and assassin for a half-dozen criminal syndicates, served time in prison, and kept close ties to a violent anarchist cell. Whether she’s genuinely political or just in it for the thrills, nobody seems to know.

The CorSec criminal report for Kaliyo Djannis contains a pixelated holoimage showing a top Exchange gangster with his arm draped affectionately around a tiny Rattataki woman. In one hand, the woman is triumphantly hoisting an assault rifle; with the other, she’s lifting a wine bottle to her associate’s lips.

The image is labeled “Kaliyo Djannis and Vanus Cruor–First Meeting.”

Thanks to contradictory accounts, Kaliyo’s personal history is murky at best. For at least a decade, she’s worked as a freelance enforcer and assassin for a half-dozen criminal syndicates, served time in prison, and kept close ties to a violent anarchist cell. Whether she’s genuinely political or just in it for the thrills, nobody seems to know.

Only when firepower fails Kaliyo does she fall back on her charm–and the underworld does seem to find her dangerously charming. Jilted associates describe her as manipulative, while other colleagues remain infatuated long after her departure. Regardless, anyone working with or against Kaliyo should be extremely cautious–no one walks away from the Rattataki unscathed.

Oh, and George Zoeller had a quite note on the forums about the Agent’s healing ability compared to the Smuggler’s:

Agents and smugglers are equally capable on the healing front.

And that’s it. Have a happy Halloween.