The world would be a different place today if it weren’t for Star Wars.
Check out this selection of Star Wars Retro Videos: 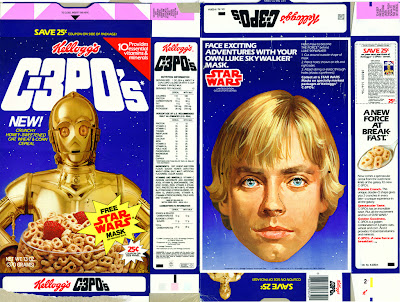 Kellogg’s C-3PO’s
I remember when I was a kid, and saw C3PO’s cereal in the grocery store. I rolled my eyes, wondering what ELSE they were going to slap my friends on. By that time, I was well over the hyper-marketed licensing, though I still loved the films.

It’s over two decades later, and I now look at C3PO’s with quite a lot of fondness. Perhaps they seem innocent, in a time when any film marketed at kids gets it’s own cereal (though with the new laws and such, for how much longer).

George Lucas Japanese TV Commercial
I am fairly sure that George Lucas would never do a TV commercial like this in U.S. So be warned, this video represents the funniest use of stormtroopers since TROOPS and the most surreal Star Wars footage since the Holiday Special.

Star Wars at Burger Chef
Hollywood tie-ins to soft drink and fast food merchandising began here. This is the legendary commercial from 1977 that started it all. It features R2-D2, C-3PO, Darth Vader, Stormtroopers and other classic Star Wars creatures all vying for free Star Wars posters at Burger Chef. The posters were given away with the purchase of a large Coca-Cola product.

STAR WARS Drunk Driving PSA Commercial
PSA featuring the creatures of the Star Wars Cantina in the famous “Friends don’t let friends drive drunk” campaign. This was produced for the US Dept of Transportation in 1979.

NES – Star Wars Commercial
Here’s an interesting NES ad if I ever saw one. In this spot a pair of normal parents are enjoying a quiet evening with their daughter while upstairs, their two sons are engaged in the Star Wars NES game. Suddenly the house is invaded by Stormtroopers, led by Darth Vader. Apparently Darth isn’t too happy about the Star Wars game so he’s come to put an end to it. While the boys continue on, their mom tries to keep Vader from entering their room. Soon the kids beat the game and Darth Vader blows up, and all Mom gets is a sarcastic remark from her ungrateful sons.

You have to admit that’s one gutsy mother, standing up to the Lord of the Sith himself.

Star Wars Anti Smoking Ad
I don’t quite remember when this commercial was shown, but my suspicions are that it aired around 1983 or 1984. By far the funniest of the Star Wars commercials, C-3PO enters a control room and finds R2-D2 smoking a cigarette. C-3PO tells Artoo how bad smoking really is, and that he wouldn’t be a good example for others, upon which Artoo rids himself of it, and agrees upon it.

According to Anthony Daniels, this commercial was supposed to be revived on television in 1997. At the last moment, the organization decided that it promoted the Star Wars Special Editions, so unfortunately the entire idea was scrapped.

In the full-length ‘director’s cut’ of the new TV advert, you can watch the robotic duo explore the floor of a megastore, marvelling at flatscreen televisions, washing machines and digital cameras, among other products.

Predictably, C-3PO gets in a camp tizzy when he briefly loses his companion, and the ad even manages to squeeze in mentions of the forthcoming Star Wars: The Clone Wars Season 2 DVD and Star Wars: The Force Unleashed video game.