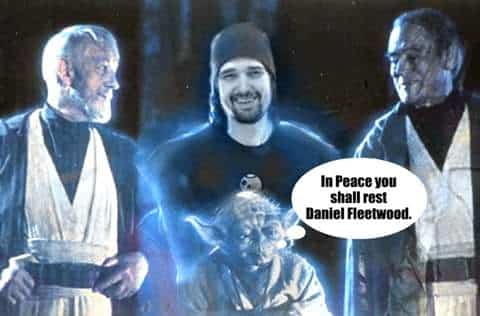 If you have not yet heard the story of Daniel Fleetwood, get your tissues ready. The 32-year-old is terminally ill, suffering from spindle cell carcinoma, a type of cancer. Recently he found out 90 percent of his lungs are filled with tumors, and this past Tuesday, he beat his doctor’s prognosis giving him just two months to live.

“I am pushing through this,” says Daniel, who takes frequent breaks to catch his breath. “I’m still here.”

In his interview with PEOPLE, he goes on to explain how he has been a fan of Star Wars most of his life. The Houston, Texas native dreams about the series, follows the message boards and writes fan fiction of it. FLeetwood also had a dying wish: to see the new film The Force Awakens.

Unfortunately, there is a good chance Daniel won’t still be living when the movie is released.

“If I got to see the movie, I might actually die from happiness,” he tells PEOPLE. “Growing up, I would watch the movies over and over and analyze every little detail. I hope I get to see what happens.”

He started a campaign with his college sweetheart wife to make his dying dream come true. #ForceForDaniel wants to give Fleetwood his final wish: a chance to see the movie. Two of the film’s biggest stars, Mark Hamill, who famously plays Luke Skywalker and John Boyega, who plays Finn, showed their support. The actors both retweeted a local news story with the campaign’s hashtag.

To their joy, his wish was granted. Fleetwood received a call from JJ Abrams and a private pre-screening of the film just a few days ago.

It couldn’t come soon enough as this morning, Fleetwood’s wife, Ashley, posted the very sad news that Daniel has passed away. Her Facebook says:

“Daniel put up an amazing fight to the very end. He is now one with God and with the force. He passed in his sleep and in peace. He will always be my idol and my hero. Please hug uncle Marc for me and give Lucy lots of kisses. Rest in peace my love. This was the last selfie we ever took together.‪#‎forcefordaniel‬”

May the Force Be with You, Daniel!