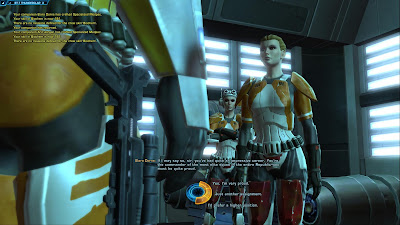 You know how we love bringing you great SWTOR news and interviews so here’s a good one from DualShockers with BioWare’s Cory Butler. In this 2,000 word interview with Butler, we learn a lot about the future of SWTOR.

Giuseppe: As you may have seen from my review, I really like the game, and so do many others. I gather that the launch was a definite success, but what are your personal impressions about this first month of The Old Republic?

Cory: It’s gone really really well. We’ve been preparing for this for a lot of time, running fire drills, planning for the worst and working for the best. We were pleasantly surprised with the server stability and just how smooth the launch went, knock on wood.

C: I don’t know about that. Star Wars: The Old Republic is actually multiple sequels to the original Knights of the Old Republic. It’s really not something we’ve talked about here at BioWare Austin, but you know, I certainly learned to never say never.

This is a particularly interesting interview because they asked some fun, great questions. For example, they ask if George Lucas got to actually try the game himself. They also talk about the content that is coming to SWTOR that we won’t see until 2013 or later. They also talk about secrets in the game such as the pink lightsaber crystals.

Read more over at DualShockers.