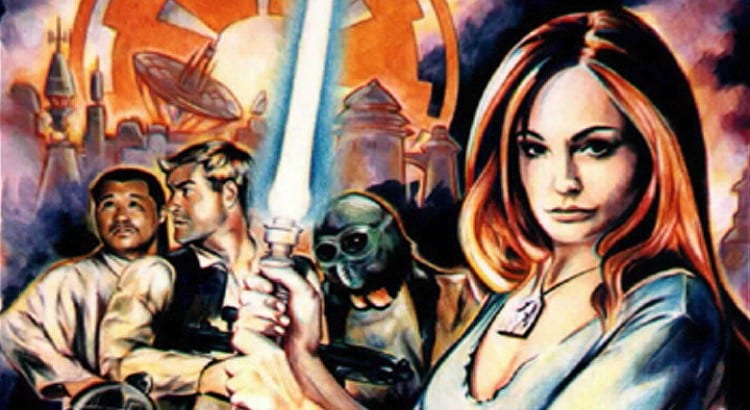 The Dark Redemption is a 1999 Australian fan film which was made using the studio grounds of Foxtel in Sydney. This follows the story of how the plans for the Death Star were sent to Princess Leia’s ship the Tantive IV as well as Han Solo’s escape from Kessel which results in a bounty being put on his head by Jabba the Hutt.

The film came under attack by Lucasfilm due to the fact that the story is constructed within the Star Wars canon.

Plot
Two days before Star Wars: Episode IV – A New Hope, Rebel Alliance agent Mara Jade is imprisoned on Kessel. Unbeknownst to all, Mara holds the Death Star plans given to her by Kyle Katarn. Upon being rescued by Zev Senesca and Klaus Vanderon, she forwards the plans to Princess Leia’s ship.

At the same time, Boba Fett makes a deal with Lt. Pol Treidum to ensure that Han Solo’s spice will reach Jabba the Hutt. Fett also attempts to stop the Rebels from escaping Kessel, but is forced to help them when his prior contract (to ensure the spice transportation) requires it.

However, (ostensibly) to create a diversion, Mara jumps into the reactor core. Zev and Klaus assume her dead and make their escape.

Meanwhile, Han Solo dumps the spice as a tactic to avoid capture – snidely remarking that he can handle Jabba the Hutt. The Millennium Falcon escapes.

Blamed for his incompetence in the apparent fiasco, Commander Garrock is summarily executed by Darth Vader.

The success of Mara’s mission sets things in motion for the Battle of Yavin. Yet Mara is shown to be an Imperial mole…kneeling before the Emperor, in his throne room on the Death Star, with Vader by his side. Dressed in her Emperor’s Hand garb, her fealty to Palpatine is fully revealed. The entire Operation Skyhook has been a scheme by Darth Sidious to ferret out the Rebel Alliance for extermination (much like the leaking of the plans for the second Death Star).

We’ve been very clear all along on where we draw the line. We love our fans. We want them to have fun. But if in fact somebody is using our characters to create a story unto itself, that’s not in the spirit of what we think fandom is about. Fandom is about celebrating the story the way it is.

Due to the fact that The Dark Redemption places the story within the Star Wars canon, the film came under fire by Lucasfilm and it was excluded from the Star Wars Fan Film Awards and its website, (http://www.thedarkredemption.com), was forcibly shut down. This triggered a reaction from fans saying that they wished to share their own Star Wars fantasies, not to dilute the mythology that inspired them or the revenue that Lucas derives from it.

Recently, Lucasfilm’s policy toward fan films has changed, turning a blind eye if they are not made for profit.