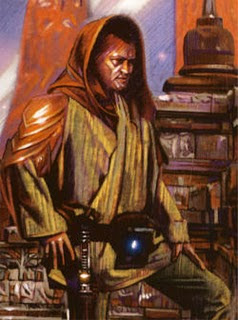 Ajunta Pall was a Dark Jedi, and later one of the first Sith Lords following the Hundred Year Darkness. His spirit was redeemed by the Jedi Knight Revan during the Jedi Civil War.

Ajunta Pall’s tomb is one of the side-quests available in the Korriban segment of the video game Star Wars: Knights of the Old Republic. In the game, he recognizes the player character’s true identity. The main character can either help him become one with the Force (for “light-side points”), fight him and destroy his spirit (for “dark-side points”), or fail to take him to the light and let his spirit fade away.

The statue of Ajunta Pall seen in his tomb is identical with the one seen in the destroyed Jedi Enclave on Dantooine in Knights of the Old Republic II, which could mean that Ajunta Pall was once a highly respected Jedi Master; however, this has never been confirmed and it is possible that the two statues are simply generic game models.

Originally, Pall’s tomb was supposed to be that of Freedon Nadd, and the error is still present in a conversation option with Lashowe. Likewise, Pall is referred to as Nadd in the dialogue files and character *.utc file. Nadd, however, had been buried on Dxun.

Biography
Ajunta Pall was one of the founding leaders of the old Sith during the time of the Old Sith Empire centered on Korriban, shortly after the Hundred-Year Darkness.

He was among the first group of Exiles that settled on Ziost. At the Battle of Corbos, which saw the defeat and exile of the Dark Jedi, he personally slew more than a dozen Jedi in battle.

He was a master of Sith Alchemy. After his death, Ajunta Pall’s spirit continued to haunt his tomb. Over the centuries, he began to question his actions as a Sith Lord and the downfall the Lords experienced at each others’ hands. 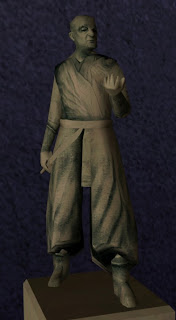 During the Jedi Civil War, Revan entered Ajunta Pall’s tomb, to retrieve Ajunta Pall’s blade so he could gain prestige from the Sith and ultimately be allowed to see the Star Map. Ajunta Pall appeared as a spirit and told Revan of his actions as a Sith, with dissapointment, telling him of how the Jedi weren’t what drove the Sith to destruction after the Hundred-Year Darkness, telling Revan that the Siths themselves battled each other and led to their deaths. Revan the took his blade and turned the Sith Lord back to the light side almost three thousand years after his death, allowing him to become one with the Force and experience peace at last. It is not known what eventually became of the blade, but Shaardan asked Revan to give it to him so he could gain prestige.

Ajunta also hinted at a secret source of Sith power. He was unable to reconcile conflicted images of whether Revan had discovered this source of power, or would soon do so. It is likely that he was referring to the Star Forge, though its connection with the ancient Sith is currently unknown. He could also mean the True Sith, the threat Revan goes into the Unknown Regions to fight and is later joined at doing so by the Jedi Exile.