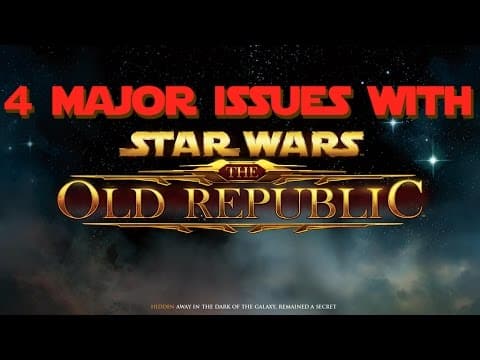 Most of us who have been playing SWTOR for a long time, especially those of us who have been playing since the beginning, know that the game has some faults. Even big fans will admit there is some room for improvement. There’s always room for improvement, and SWTOR is no exception. So here’s a video that addresses some of these issues. Give it time and an honest chance before you just shake it off as a complaint video. They bring up some legit complaints as well as some options for how this should be remedied.

“Here’s our list of 4 major issues with Stars The Old Republic. Agree? Disagree? Share your thoughts in the comments below.”

This is their second video about SWTOR and in Part 1, they actually give 10 reasons new players should try the game. This video is geared more toward problems that older players have with the game and what these major issues are. So this isn’t just SWTOR-bashing going on. These are legitimate complaints from their point of view. We’ll highlight their four issues below but you need to watch it for yourself to see the reasons why they think each of these is an issue.

4. Cartel Packs of the Old Republic

In addition to number one, there’s just a lack of new content period. Everyone who plays and enjoys the game has been saying again and again that they want to keep playing and enjoying the game but we just need to see more content in order to make that happen. It just doesn’t feel like BioWare is working on the right things. So what do you think? Watch the video for yourself (it will take barely 5 minutes of your time) and let us know if you agree with their assessment.