The first Knights of the Old Republic game in 2003 was, as a few people may already know, the first thing that really got me into Star Wars; to this day I still remember the amazed feeling of awe I had when I first set foot on Taris and looked at the beautiful city landscape, the shining sun in the game adding to the mood of the setting. The feeling was really cinched when I reached the ultimate twist in the game; that you are in fact Darth Revan, the apparently dead Sith Lord who was betrayed by his (or her) Apprentice, Darth Malak. There’s never been anything that’s really been able to replicate the epicness of this game – even the sequel, penned by game company Obsidian, wasn’t quite as good. I’m one of the few people who thought that The Sith Lords was actually a great game; sure, parts of it were rushed, and reading all the cut content makes me want to cry a little. But despite that, it was still a very satisfying game with a cliffhanger that left me going, “DAMN IT! I NEED THE THIRD ONE!”

In light of that – a notion that was also the feeling of countless other KOTOR fans – it’s understandable how a lot of people were upset and disappointed when, instead of the Knights of the Old Republic 3 many people had been wanting and waiting for (and even expecting) we got The Old Republic. I was among this crowd, and still am to a point, even if I’ve warmed up greatly to TOR and am now really looking forward to it. Let’s see, though, the good and bad points of TOR being made, and whether or not making TOR instead of KOTOR 3 was a good move on Bioware’s part.

As everyone who has played the two KOTOR games knows, those games are very story and character-driven, dragging you in and not letting you go until the ending. We became attached to the characters – Revan, the Exile and all of our crew on the Ebon Hawk. Because of this, we want to see where they end up; who becomes a Jedi, who maybe even turns to the dark side, etc. Sure, we got a little bit of information at the end of KOTOR 2 – Disciple becoming a great Jedi was the most specific thing, however. The rest of it was just Kreia being vague. “Atton is a fool, and the Force looks out for ones such as him.” Ah, that really gives us some solid info. Thanks, Kreia. Thanks alot. 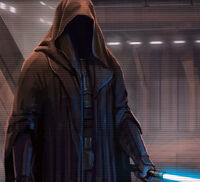 My point being, considering how attached we did get to the characters and how great the story was, I still feel like we needed one last installment to wrap things up and conclude those specific story lines. For example, what happened to Revan when he went to find the True Sith? I know they’re going to devote a whole part of TOR to this, but in a way, that’s disappointing. I don’t want that story to be told by exposition, but unfortunately, it seems that that will be the fate of that great plot line. We aren’t going to get direct answers to many things, if anything at all – this game will be a couple of hundred years (if my memory is correct, at least) after the KOTOR games, so a great majority of the characters from those games will be dead and the galaxy will be in a total different state.

TOR is also going to be a vastly different gameplay experience than the KOTOR games – no, this time around we don’t have a simple RPG like before. We have a World of Warcraft-type game now, but just – well, Star Wars. So it’s like Empire at War. Except good this time.

Despite the fact that I do wish we had instead gotten KOTOR 3 rather than TOR, with so much of the latter being shown, I can’t help but get excited and eager for the release. Let’s face it, the game looks freakin’ awesome – as I said above, it’s WoW, but in SW form with an almost Mass Effect-type format, most notably with the fully voiced character and dialogue circle-type thing. The graphics look pretty fantastic, too, and this will definitely be the first MMO I play (well, I HAVE played World of Warcraft before, but that was only a trial. So… that doesn’t count!).

The story also seems pretty intriguing. The Jedi and Sith at war with each other certainly isn’t a new story, but in MMO format, and with the neat little tidbits we’ve been given, it certainly has the potential for epicness.

The fact that we can also play as a whole great variety of factions and species is awesome – I’m SO going to be a bounty hunter. Maybe a Chiss one. Hell yeah. It’s rare when you can play something like a Miraluka or Rattataki in a video game, if only because those species are so much less known than something like a Twi’lek. Now if only they would add in Arkanians – after all, Jarael is a main character in the KOTOR comic series, so that would be perfect! Please Bioware? Please…??

There’s also a whole great variation of planets to pick from to travel on – Nar Shaddaa, Ord Mantell, Ilum, Alderaan, Balmorra, just to name a few. I actually hope more planets are revealed, because with how big the game apparently is, there’s certainly room for a few more really good ones – I mean, what, no Kashyyyk? Really? Boo!

To wrap this up, I would’ve loved more than anything had they chosen to instead make Knights of the Old Republic 3 rather than The Old Republic – something they want to be a sort of third installment, but we all know it really isn’t. Despite that, however, I actually am looking forward to TOR – it should be a great playing experience, hopefully with a story that’s just as good as the KOTOR games, and I plan on picking it up as soon as it comes out.