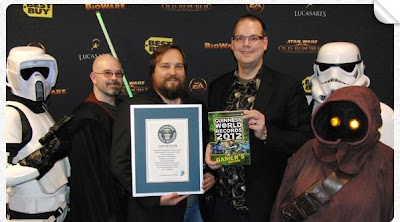 Star Wars: The Old Republic has been officially recognized by Guinness World Records which is a very cool honor indeed. Just shortly after its launch on December 20, 2011, the popular MMO was awarded a spot in the latest Guinness World Records 2012 Gamer’s Edition. The big title? the Largest Entertainment Voice Over Project ever.

More than 200,000 lines of recorded dialogue were performed by several hundred voice actors, making it a far more ambitious recording project than any undertaking for a feature film. (via MMOSite.com)

Because the record is such an awesome one, it received a full 2-page spread in the book, which I try to get every year because it’s great fun to read and have around. Here you will find a tribute to 30 years of Star Wars gaming with fun facts, new records, figures and more – all about Star Wars.