BioWare updated their webise this morning with a new addition to the swtor.com/buy page.  It’s now possible to pre-order the first ever expansion for Star Wars: The old republic, named  Rise of the Hutt Cartel. The sales page also reveals new details regarding price, content and of course, how to pre-order.  The drop date listed is Spring 2013. Here is the run down:

The page also includes  a new FAQ about the new expansion.  In it, there is a pretty lengthy description of what players can expect with the release of Rise of the Hutt Cartel:

Rise of the Hutt Cartel, the first Digital Expansion for Star Wars™: The Old Republic™, introduces 5 new levels, including story-driven missions, as the Level Cap increases to 55! Face off against a frightening new enemy on the brand new planet of Makeb as you battle the nefarious Hutt Cartel and its massive new creatures and weapons of destruction.  The Hutt Cartel has emerged from the shadows to challenge the Galactic Republic and Sith Empire for control, unleashing never-before-seen Droids and monstrous battle stations to serve as powerful weapons of destruction. As a player, you will be forced to take a side as you earn new weapons, armor, abilities and more. 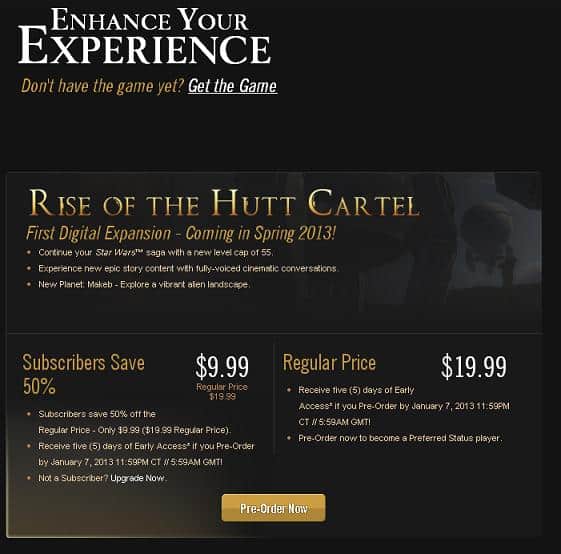