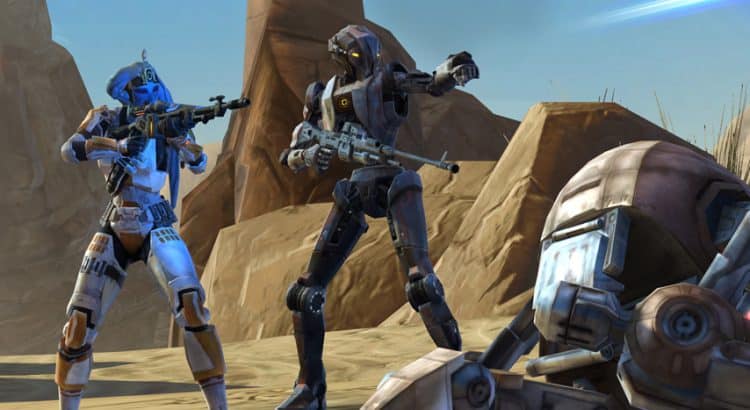 Former SWTOR producer Ben Irving is moving to another position within Bioware, and Keith has now taken the position as new producer of Star Wars: The old Republic:
Hi everyone!

I know it’s a bit later than usual for a Producer’s Letter for this year, but we’ve been making some adjustments behind the scenes and finalizing our next game update – The War for Iokath (Game Update: 5.2). One of those changes is the Game Producer role with Star Wars™: The Old Republic™. Ben Irving has moved on to a great new opportunity within BioWare, giving me the pleasure of leading the SWTOR team as Game Producer.

Many of you may recognize me from our livestreams when Eric Musco gives me a shout out as, “my boss, Keith,” while others of you have met me at our Cantina Events, or on calls with players and our influencer programs. And, quite of few of you know me as a dedicated player, as I play on several different servers with multiple characters.

In my previous role as Director of Live Services for SWTOR, my primary responsibilities were to ensure the game servers were live, that player blocking issues were quickly identified and resolved, and to be the main interface between BioWare and our Customer Service organization. Essentially, anything impacting our players fell to me and my team to get resolved.

I’ve been with BioWare/EA and SWTOR for the past six years, where I’ve held a variety of positions, and have always been a very active player with nearly 10,000 hours of gameplay, 28 plus characters and tons of achievements. I love playing the game and participating in all different types of gameplay, with PvP being one of my favorite activities. So, when you have frustrations with the game, I’m likely having the exact same concerns.

As the Game Producer for SWTOR, I help guide and influence the development team to continually improve the gameplay experience for everyone. Regardless of your play style, there’s a lot we have planned for all of us this year. We’ll have fun activities for you whether you’re a player who loves Star Wars™ stories, or the veteran who is looking for new challenges and more options to play with friends, or if you simply want to play on your own. Look for the SWTOR Roadmap in the coming weeks where we’ll offer insight about what’s happening this year and what you can expect in the coming months.

Look for us at our upcoming Community Cantina event in Orlando, Florida at Star Wars™ Celebration on Friday, April 14th, at the Orlando Hilton from 7 – 11PM EST. If you’re in town, come join us, chat with the team, ask us questions and share your feedback, or just have a drink on us!

Hope to meet you soon!