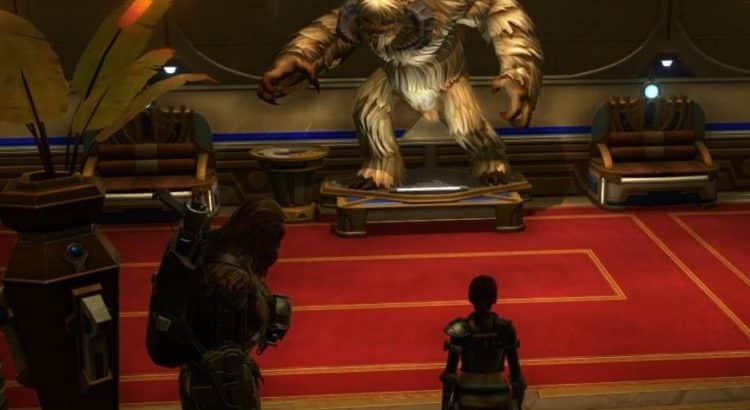 Game producer for Star Wars: The old Republic Keith Kanneg, took over the forum syesterday with an update on what to expect with te game in the future.

It has been a while since I put out a post so I figured I would stop into the forums and get an update out to everyone. I’ll provide you with a brief update about what’s coming soon, but first and foremost want to address the issues we’ve been experiencing with our Tulak Hord server this past week. It’s being very stubborn and every time we think we have it nailed, it decides to kick some players from various areas in the game and won’t let them back in for a while. Not a great experience for anyone and I apologize we haven’t fixed it already. We believe it’s an intermittent hardware issue, making it difficult to isolate, so we’re rebuilding that server and will deploy a new one later tonight. We’re going to have to take the European servers down, but we’ll look to get it done while most of you are sleeping. We will let everyone know when we’ve completed the effort.

Let’s talk about Onslaught! Like many of you, I have been really enjoying the expansion and all the changes we made for gearing. I now have quite a few toons up to level 75 and virtually all of them are at Item Rating 306. I’m spending time changing stats of individual items, playing around with amplifiers, and seeing what changes will make me feel OP. What feels good is being able to play anything in the game and benefiting from the new gearing system. I also have read many comments over the past couple weeks about areas you’d like to see changed, and as you’ll see starting with next week’s patch, we are addressing them and will continue refinements over the coming months. Keep the posts coming as they’ve been very helpful to the team.

We are extremely pleased with the launch of the expansion. I don’t want to jinx it, but from the game standpoint, it has been very smooth with relatively minor issues all around (the Tulak Hord server being the exception). We fixed a number of bugs a week following the expansion and we have a number of additional bug fixes being released in next week’s patch likely on Thursday the 14th of November 2019. I know we usually release on Tuesday, but there’s a few items we want to include in this patch, so we gave the team an extra couple days. There is also a little surprise for everyone included with the patch, but we will let you know what’s up on Tuesday.

Patch 6.0.2 will be our last update for 2019 and we’ll target its availability mid-December. It’ll have additional bug fixes along with the following:

We have Game Update 6.1 planned for early 2020 making its PTS debut in December. When we’re ready to have you take a look, I’ll share more details about the update and give you a glimpse into our future plans for SWTOR. Don’t forget Star Wars™ Celebration is planned for August and in Anaheim, California next year. We’re already making our plans to be there. Would be great to meet a bunch of you at the event! Thanks everyone for making Onslaught a success. Keep your thoughts, concerns, and ideas coming as those are an invaluable source of feedback for the team.